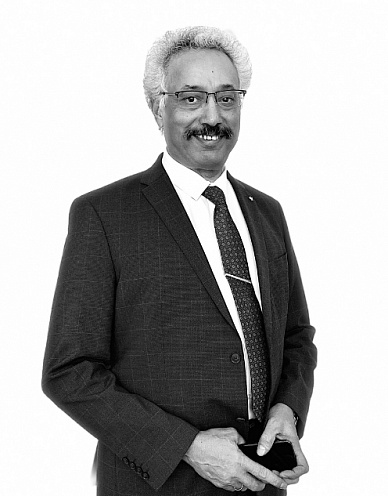 In 1988 he graduated from the Patrice Lumumba Peoples' Friendship University with a degree in Industrial and Civil Engineering. In 1993 he received the degree of candidate of technical sciences.

Mohamed began his career in 1981 as a design engineer at the Ministry of Design and Construction of the People's Democratic Republic of Yemen. Since 1992, he worked in the Moscow branch of the British company Waterman International, first as a structural design engineer, and since 1998 as the head of the branch. Since 2005, Muhamed has been the Co-Founder and Commercial Director of Metropolis.

Taking part in many international projects, Muhamed has accumulated vast experience in the development and implementation of the most complex and unique design solutions in civil engineering. Among the numerous projects developed and implemented with the direct participation of Mohamed Nasser are office buildings, hospitals, residential buildings and hotels, multifunctional and entertainment complexes located in the UK, France, Georgia, Saudi Arabia, UAE, Russia and other CIS countries.

Mohamed Nasser sits on the jury of prestigious real estate competitions such as the CRE Federal Awards and others. Also, Mohamed is the author of a number of publications in industry publications, including a series of articles on the reconstruction of the Grand Sports Arena in Luzhniki in Sport Build magazine. Mohamed is a member of the RUDN University examination committee for the defense of diploma projects in the specialty of PGS.