Interfax, 6 June 2022
A hospital should inspire for recovery

Many interesting and even unique facilities are being built in Moscow, including social facilities. One of the largest, not just in Moscow, but also in the Russian Federation, is the new building of the hospital of the Moscow Clinical Scientific Center named after Loginov, where the most modern technical and technological solutions are applied.


Representatives of the Metropolis company Dmitry Vishnyakov, Chief Project Engineer, and Andrey Zakondraev, Chief Project Architect, told the Interfax Real Estate portal about how this facility is being built and what tasks had to be solved during its construction.


The treatment and diagnostic complex of the State Budgetary Institution “Healthcare Moscow Clinical Scientific and Practical Center named after A.S. Loginov of the Moscow City Health Department” is one of the six anchor oncological hospitals in Moscow. The center is located in outdated medical buildings built in the 1950s-1970s, where it is no longer possible to fully provide modern medical services to the population. Here, in 2020, the construction of a new eight-story medical and diagnostic building with an area of more than 75,000 m2 began. It is erected on the site of two old buildings. The new building will be connected to the existing buildings by two covered walkways. 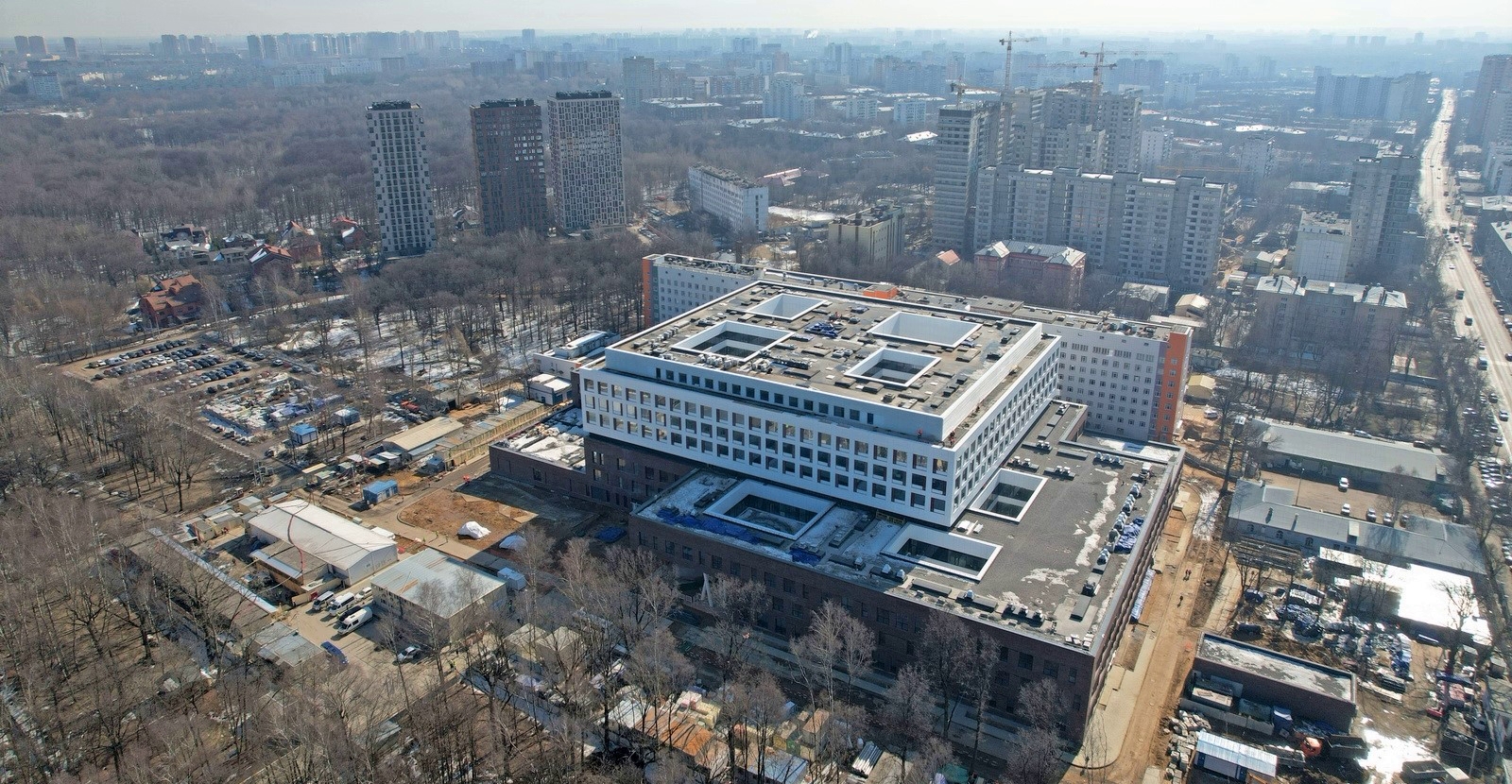 The general designer of the facility, the Metropolis company, plans to complete the development of the working documentation for the new building in 2022. It will provide a full range of services, from diagnostics to rehabilitation. The building is being built by order of the city. If from the point of view of construction it is an ordinary object, then from the point of view of technological and engineering solutions it is ultra-complex. This is a unique object according to the city code due to the use of atomic energy.


“Fundamentally, the design of medical facilities, especially of such a volume and such a class, is probably the most difficult thing in the design of civilian facilities in the world. The most complex technology is used here, which involves filling with engineering systems that are not found in other unique buildings. A large number of rooms with different cleanliness classes with their own ventilation units are concentrated on a relatively small area of the facility. The number of such installations at this facility is more than a thousand. For comparison, a modern office building requires no more than 200. Accordingly, this requires the most complex linking of air ducts and engineering. 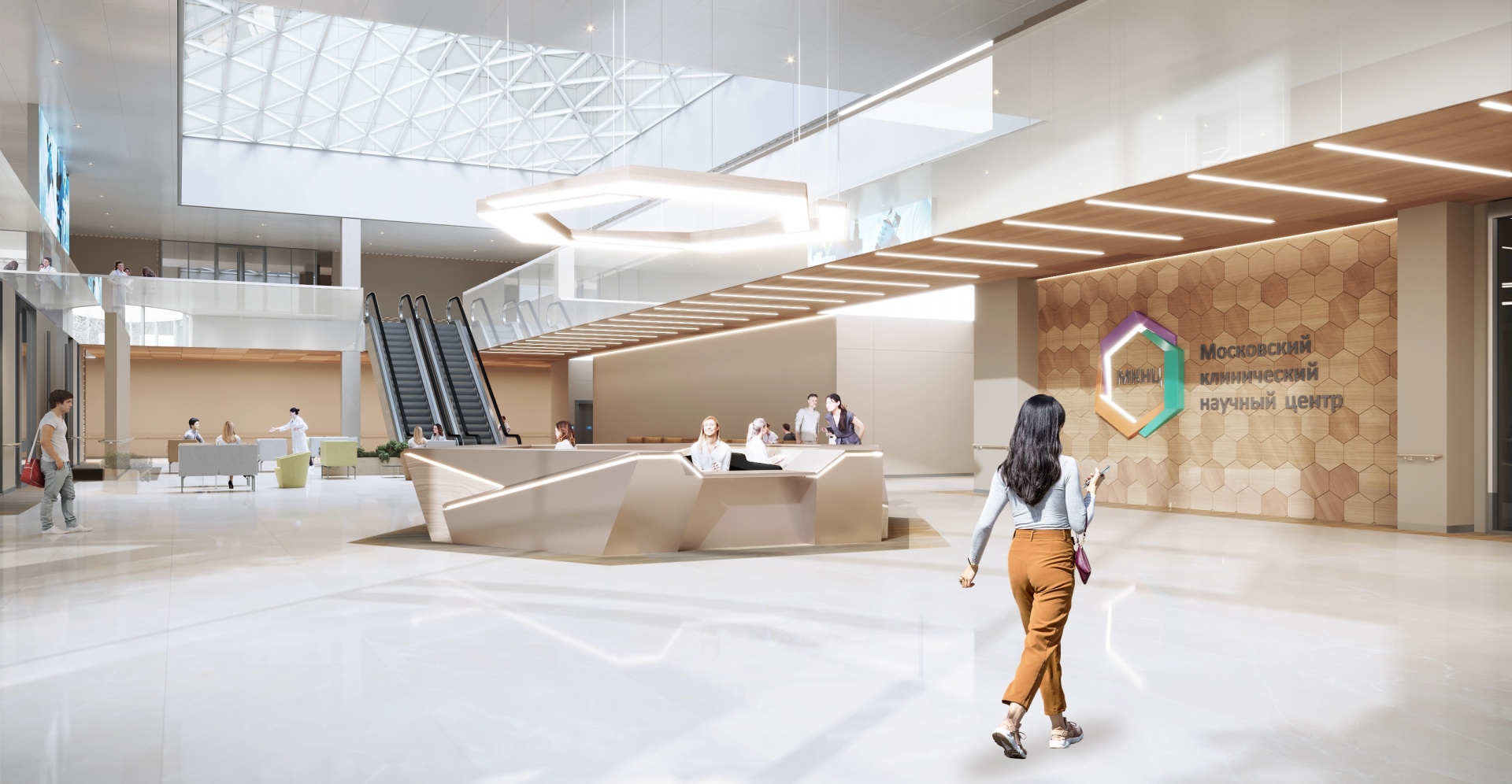 The complex is a single eight-story composite volume, formed by rectangular volumes of different functionality and different heights. The first three floors form a medical and diagnostic block, the facades of which are made of clinker bricks, with oblique piers of various widths, which form the dynamics of the facades.


Next comes a one-story technical block for the placement of engineering equipment. Facades are a system of decorative lamellas encircling the building around the entire perimeter.


Above is a three-story block of ward departments, made of large-format white cassettes. The main elements of the façade glazing are panoramic windows 2.4×2.4 m in size with a ventilation compartment. Such a system allows not only to enjoy the environment, but also provides the premises with a means of controlled natural ventilation and cooling.


Also an interesting solution is the organization of courtyards, which made it possible to place a large number of medical rooms around the perimeter.


The main entrance group is formed by a high overhanging part resting on groups of inclined columns. Above is a large domed lantern, providing good illumination and spaciousness of the main entrance. 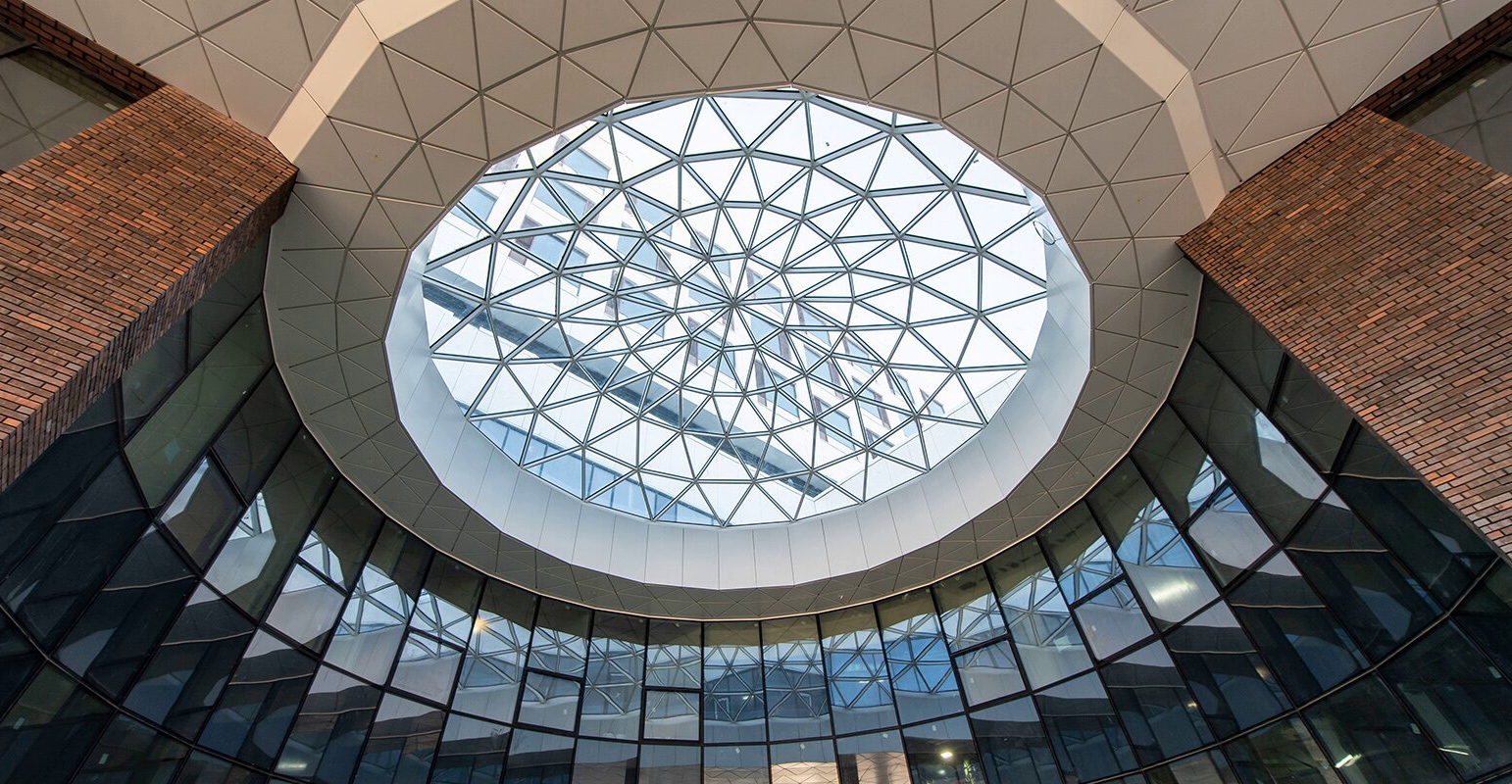 The new building is designed for 570 comfortable beds. Each room includes a separate spacious bathroom with a shower and hanging plumbing equipment, an individually controlled air conditioning system and modern furniture, including multifunctional beds.


We paid a lot of attention to the wishes and requirements of the specialists who will work in this building. The new building will house dozens of departments, and we met with the head of each department to get feedback, including whether the location of furniture or technological equipment would be convenient. In the design process, input data changed several times, but we took it all into account.


For this project, mostly Russian-made building materials were used. A lot of unique medical equipment will be foreign. As for the construction part, almost everything is domestic – almost 90%. 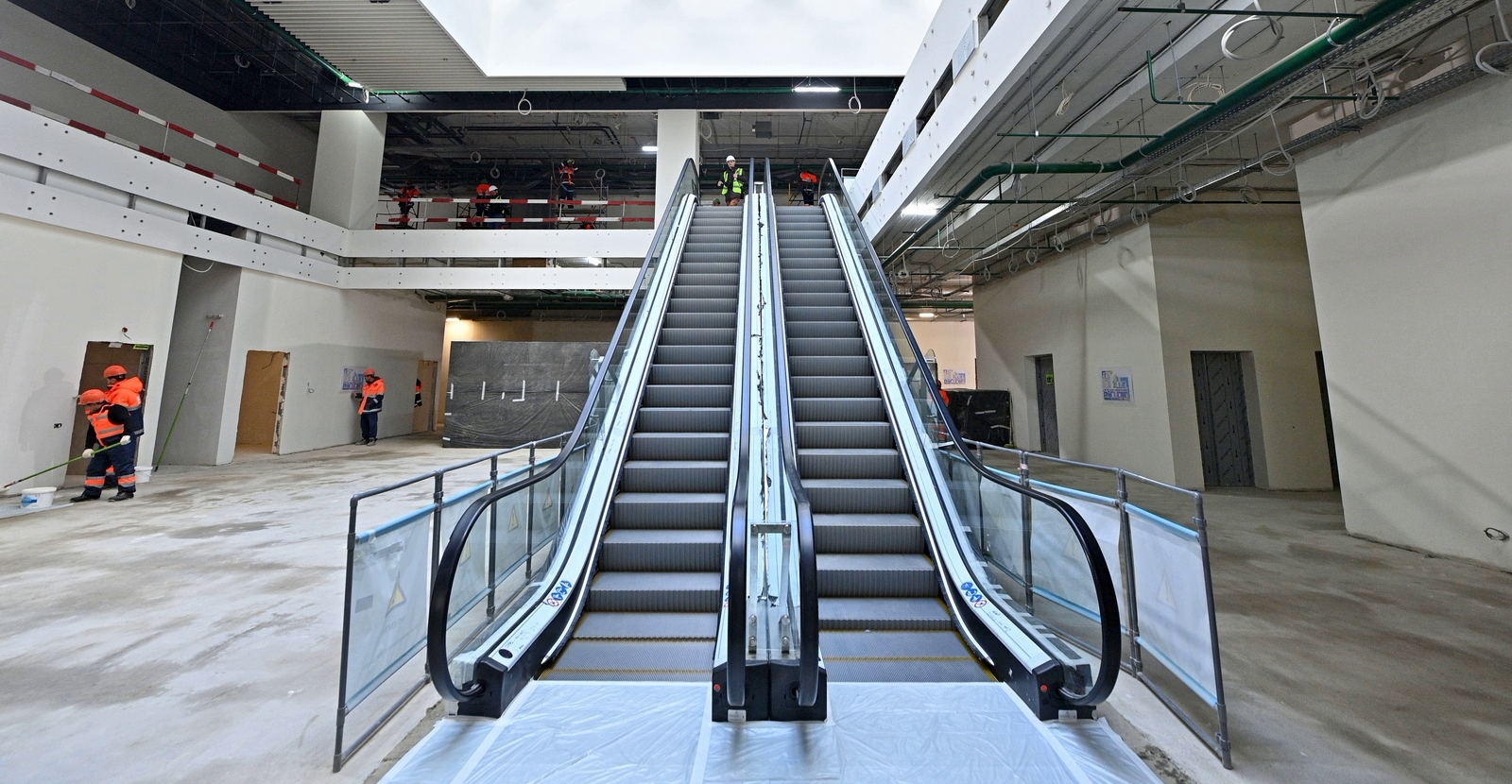 In the decoration of the MCSC, natural and imitating natural eco-friendly materials are used. Various turnkey systems and solutions for fire protection of metal load-bearing structures based on Fireboard plates are used. In addition, Knauf materials such as various GSPs were used at the facility, including the unique SAPPHIRE plate, GVL, Aquapanel, Safeboard for X-ray safety.


The choice of Knauf products can be attributed to the variety of solutions for various applications. For partitions and walls, it is worth noting such qualities as a relatively small thickness and weight, strength, effective sound insulation, speed of installation, a minimum of finishing work, fire-resistant properties. 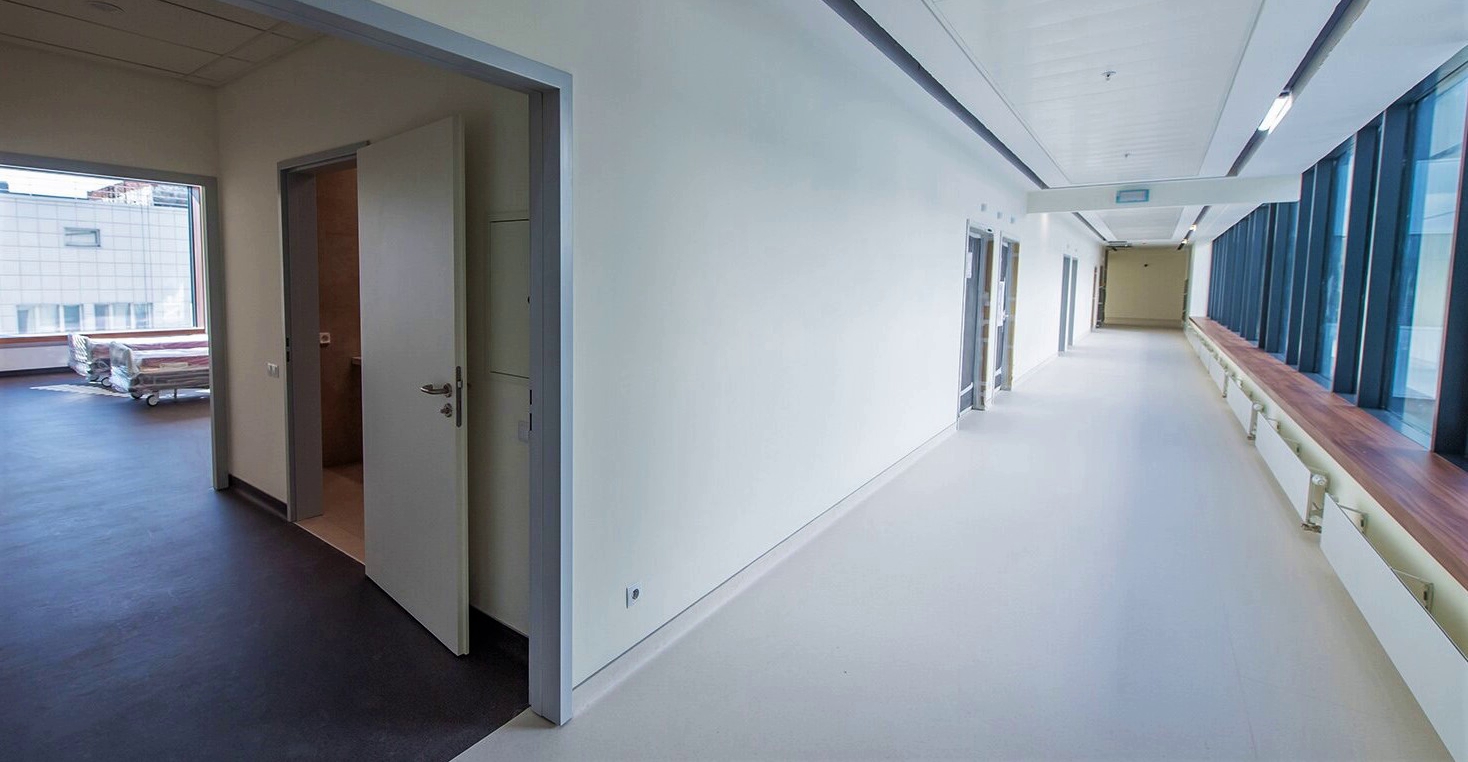 We have developed a separate large project for interior design. This is not just a hospital, we spent a lot of time creating a comfortable environment. Our design solutions are coordinated with the management of the hospital, they guided us in the nuances and the specifics. We consulted on colors, images, combinations with a psychologist who is an expert in the mood of patients. We also have internal and external navigation, so that it is convenient to navigate in the building and on the territory of the hospital. To improve the information content of the space inside the building, the allocation of individual zones and floors with various color and design solutions was applied. The use of information boards, steles, diagrams, markers and other design techniques is provided for better orientation of visitors, staff and patients. A graphical language (fonts, icons, etc.) has been developed. It should be comfortable, as the object is huge, and it is easy to get lost. Floor area is from 5,500 to 15,000 m2. There are 2,800 rooms at the facility.


It is important that the new hospital is being built on the territory of a functioning medical institution. There is a working building that operates and will continue to operate.


With the construction of the new building, the entire territory has undergone significant changes: transit flows have changed, a parking lot has been equipped, intuitive navigation and a barrier-free environment have been created, landscaping has been elaborated. For a comprehensive solution for the improvement of the territory, we attracted leading consultants specializing in their subject.


As for the preparation of the object for commissioning in the current conditions, it was decided to hand it over completely ready on a turnkey basis. This is an ambitious task, because this is the largest hospital under construction in the Russian Federation at the moment.”


Read the full material on the Interfax Real Estate website.

Awarding of the participants of the case-championship «BIM on Ice»