On October 11, the Central House of Architects hosted the opening of the General Meeting of the members of the Russian Academy of Architecture and Building Sciences (RAASN), as well as the exhibition dedicated to the anniversary collection "30 years of the RAASN".


As part of the ceremonial events, awards were presented for the competition of the best final qualifying thesis. Guzel Fasykhova (Safiullina), Leading HVAC Design Engineer of the Kazan office of Metropolis, representing KSUAE, was awarded the RAASN medal named after N.V. Nikitin for the thesis "Development of energy-efficient symmetrical three-way plugs to reduce the energy consumption of ventilation systems", written under the guidance of Doctor of Technical Sciences, Professor Ziganshin Arslan Malikovich. 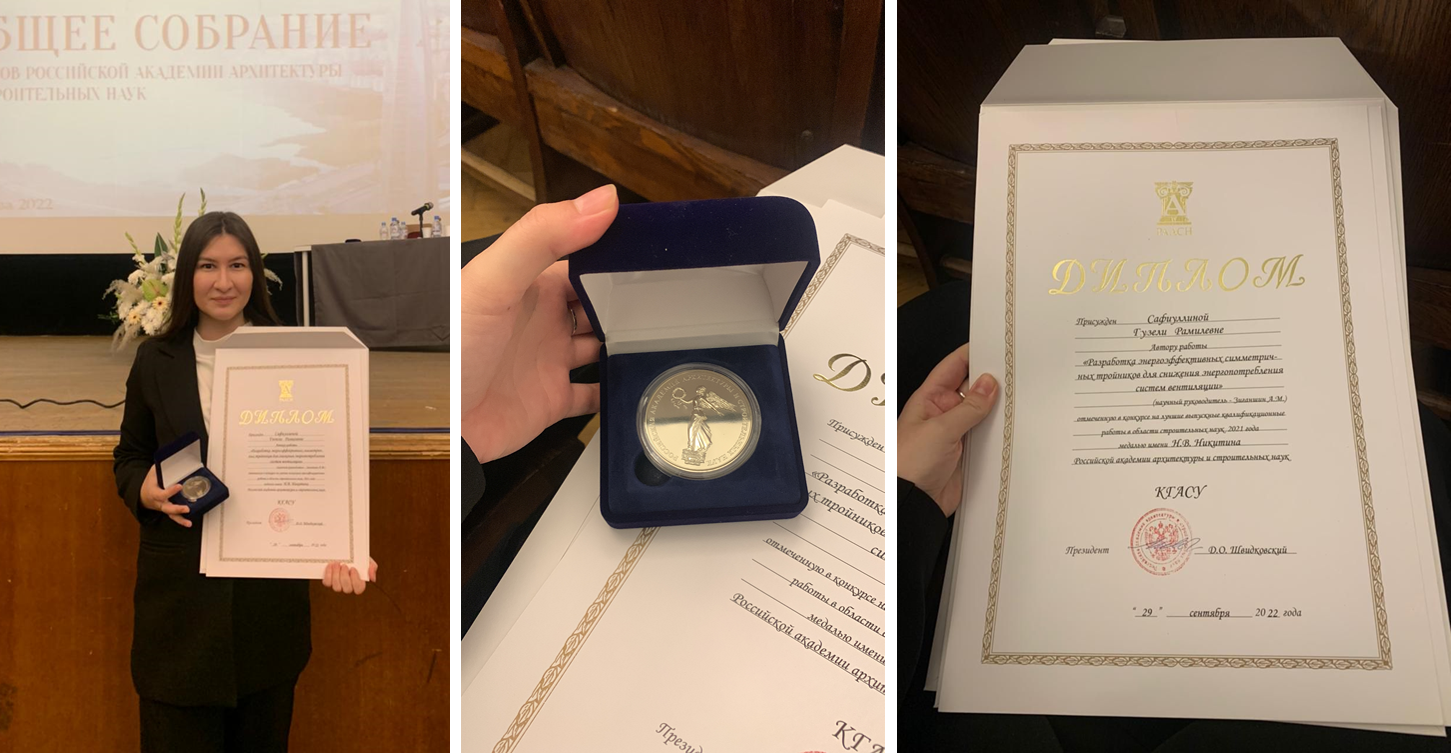 The competition was organized by the Association of Construction Universities together with the Russian Academy of Architecture and Construction Sciences. This competition is a kind of superfinal, in which not only the best works that take first places in their training profiles go, but only those works that have scored the highest points in the overall standings in the enlarged group of areas "Engineering and Construction Technologies".


This year, 12 best graduation qualification works of masters (or specialists) of various construction profiles took part in the competition. These works won the competition held in 2021-2022 by the International Public Organization for the Promotion of Construction Education. According to the rules of the competition, the jury determines only one winner from all the submitted works.


At the General meeting, the Minister of Construction and Housing and Public Utilities Irek Fayzullin, State Duma Deputy V.I. Resin, Executive Secretary of the Commission of the Russian Federation for UNESCO G.E. Ordzhonikidze stood with solemn speeches and congratulations.


Also, the President of the RAASN, Rector of the Moscow Institute of Architecture D. O. Shvidkovsky and academicians of the RAASN made presentations. In his speech, Dmitry Shvidkovsky noted the role of the Academy of Architecture in the life of the country, outlined the main milestones in history that determined the change in direction in the overall stylistic development of architecture and urban planning. With great respect, he spoke about the academicians, members of the RAASN, who played a key role in architectural practice, history and theory of architecture and urban planning.


We congratulate Guzel on this impressive success and wish her further victories at science and work!

Positive conclusion on the project of a residential complex at Avtozavodskaya