The Iskra-Park multifunctional business class complex consists of an apartment building, an office center with apartments, united by a joint underground part, as well as an administrative building.


The complex is located on Leningradsky Prospekt, next to Dynamo and Petrovsky Park metro stations. The total building area is 234 000 m2. Transport accessibility of the Iskra-Park complex is ensured by proximity to the intersection of Leningradsky Prospekt and the Third Ring Road - residents have a quick access to two significant routes at the same time.


This location is one of the most prestigious business districts in Moscow and is called the "Leningrad Corridor". There are two towers of the Skylight business center, the White Square business cluster, and the White Gardens business center located next to the Iskra park.

The futuristic building of the business center has a facade with a "diamond-cut" effect. With the help of glass and facades’ active light movement, the architects of the SPEECH bureau created a contraposition to the background buildings.


The building consists of four sections of variable number of storeys from 8 to 17. Ten entrance groups are equipped with seven elevator halls, nine reception areas and the latest access control systems; comfortable and high-speed vertical transport is provided. The upper floors have outdoor terraces.


The height of each module in the shape of a truncated lozenge is 4 storeys. The use of such elements in the design of the facades allows you to hide the actual number of storeys - from the outside, the building is perceived as a sculpture. The glass shell, complex in its geometry, is a warm outline of the building. From the inside, the floor slabs adjoin directly to the glazing, and opaque glass is used in the areas of this fit. 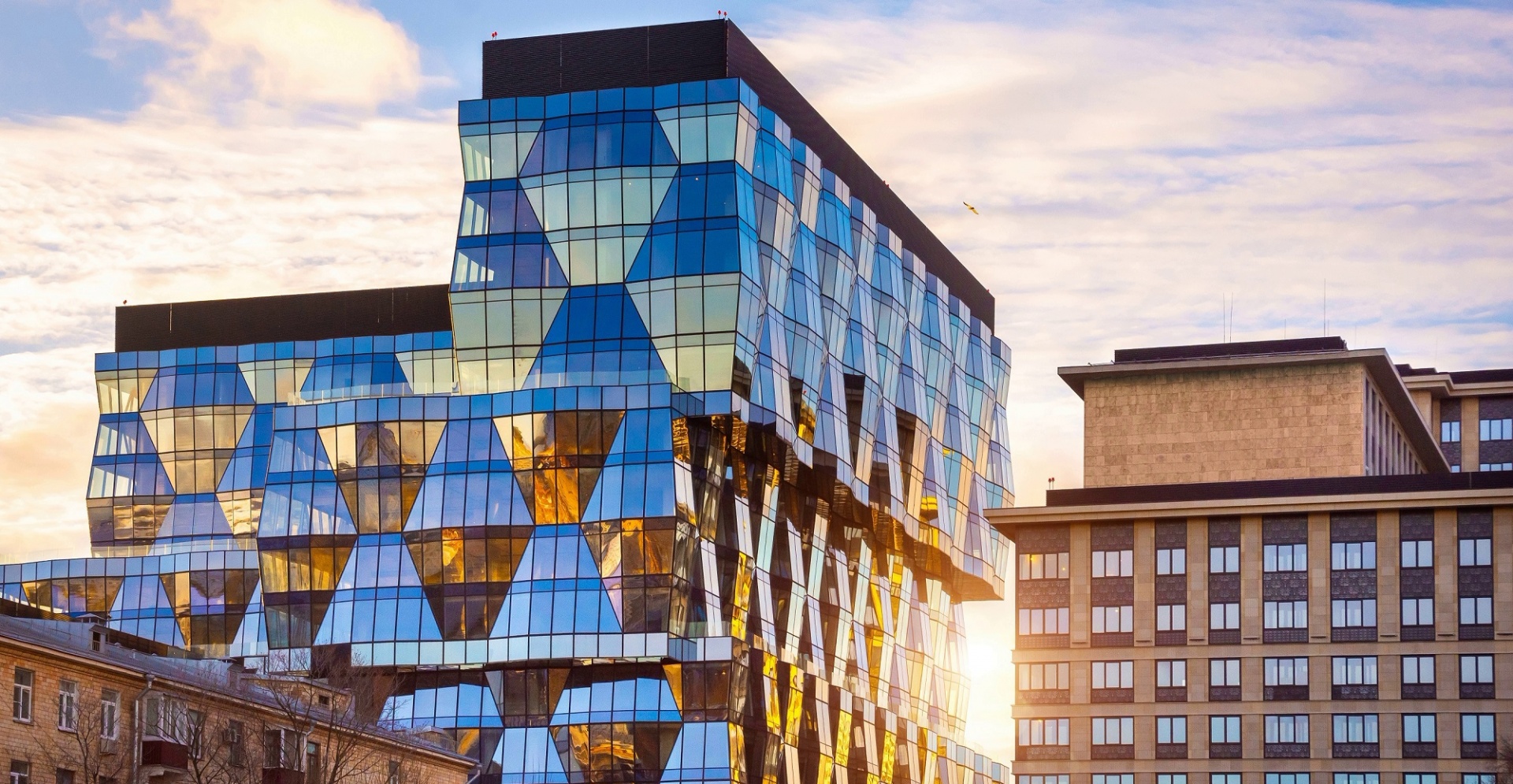 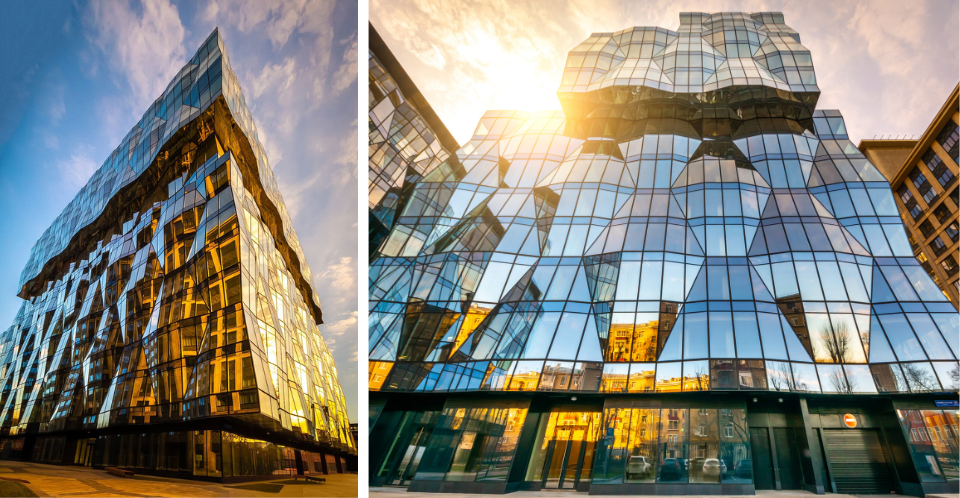 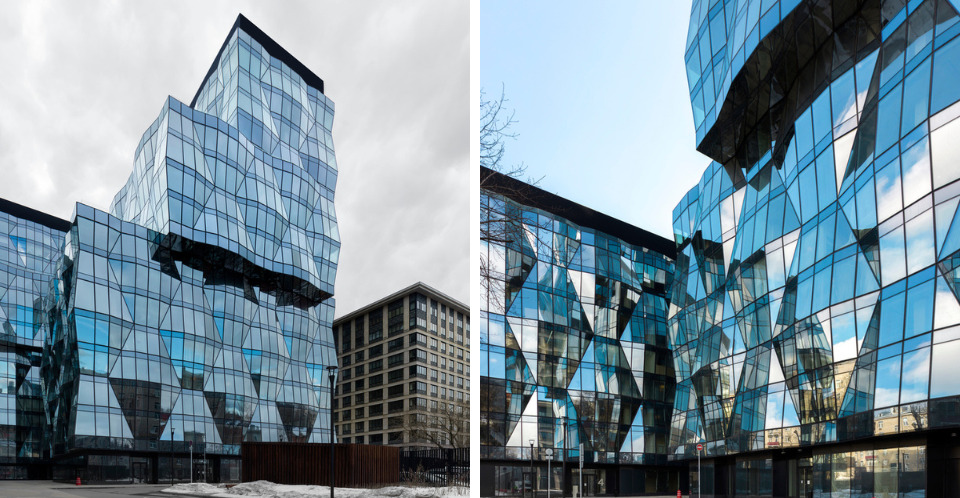 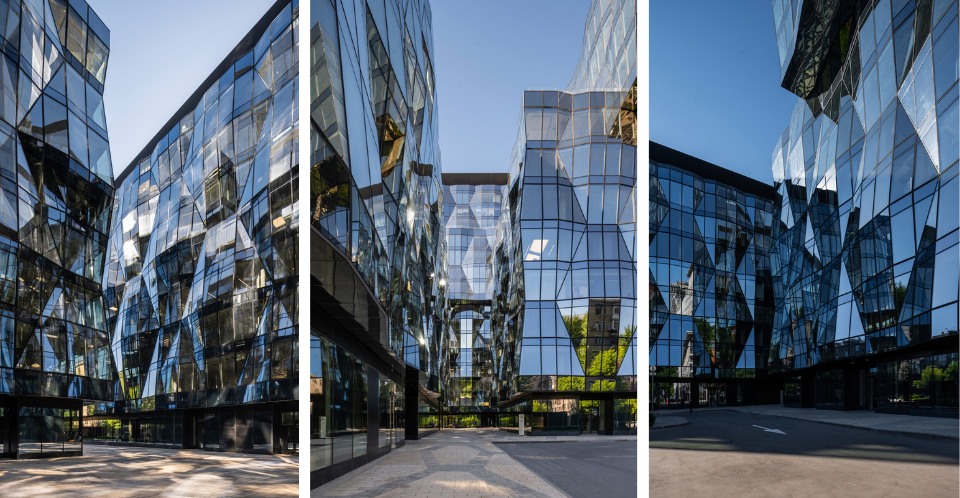 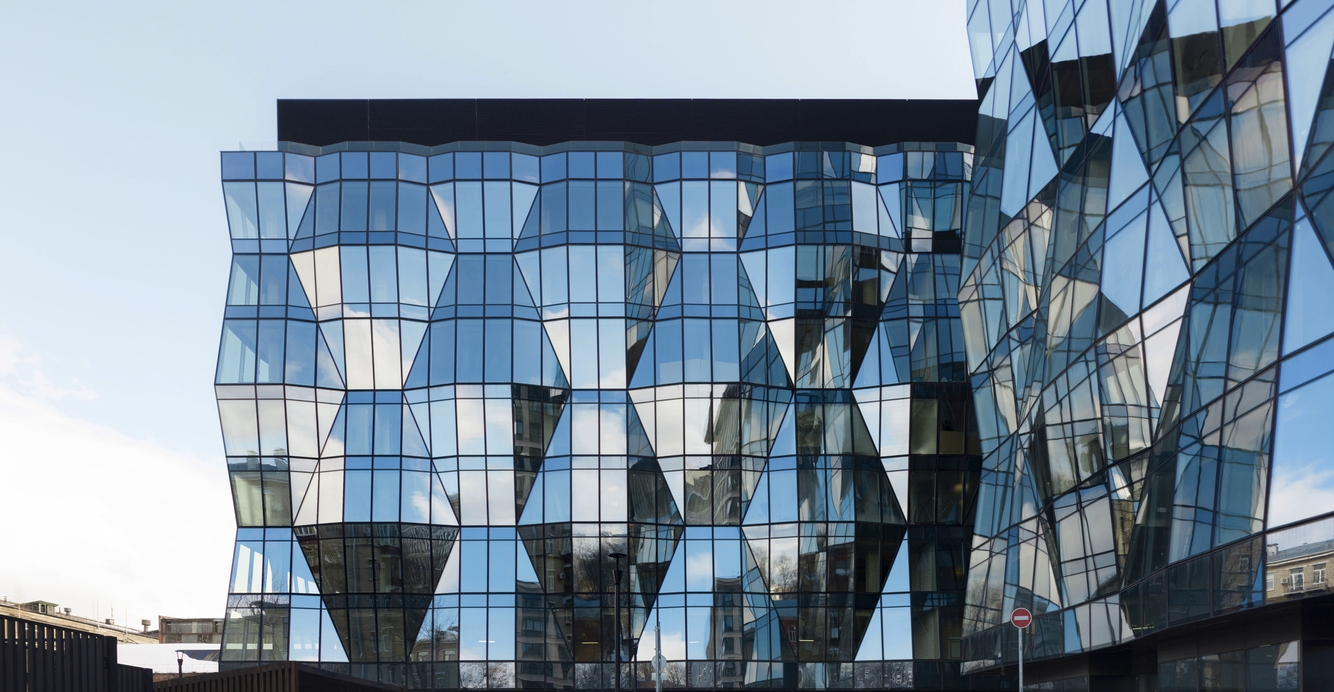 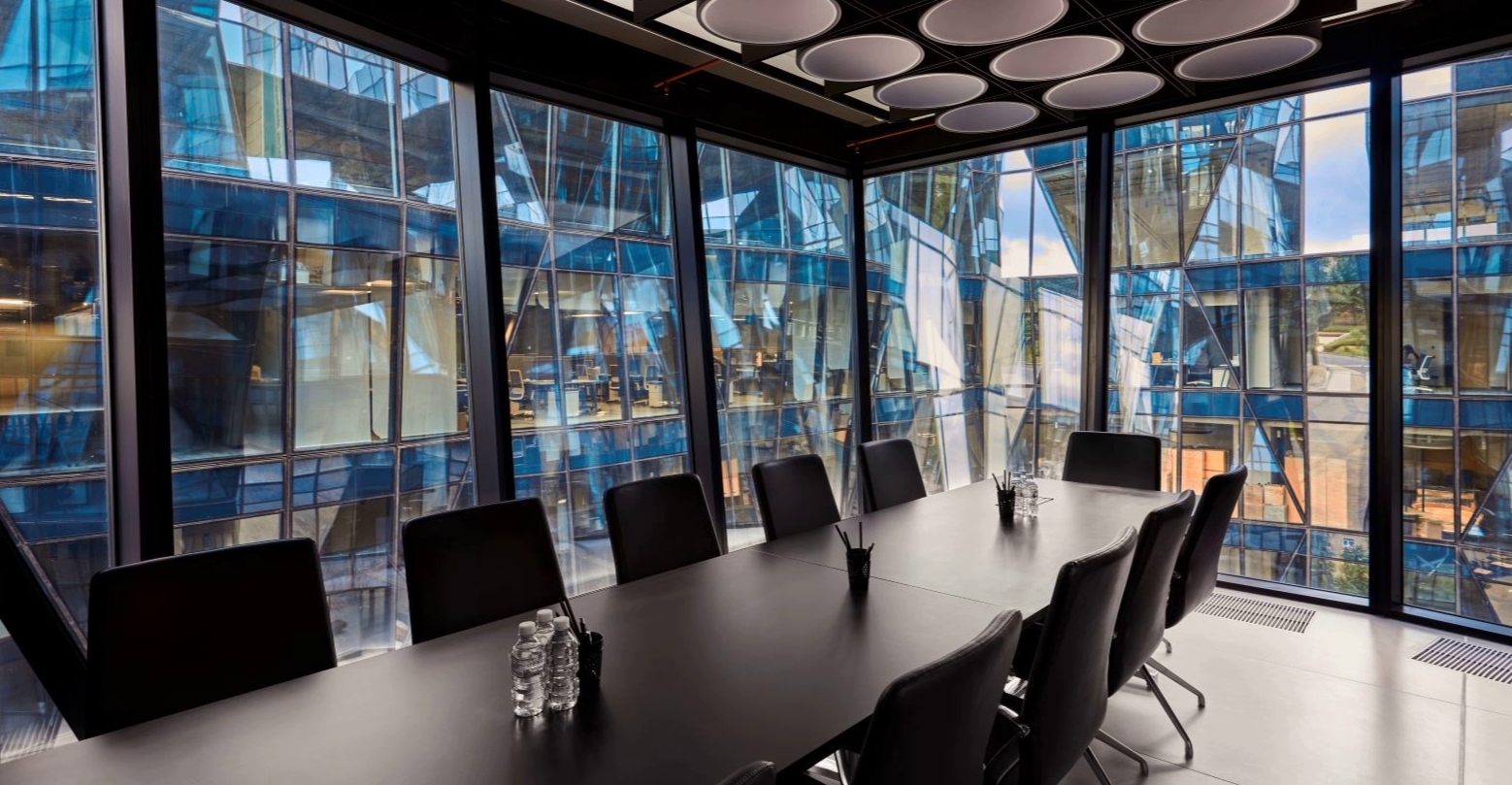 The residential building is a rectangular composition of ten sections with 8 to 17 storeys. It creates a closed courtyard and separates the inner space from the street, in particular from the traffic of cars. Inside there are 772 apartments of different sizes with a ceiling height of 3.1 m.


The facades of each section are decorated with ornamental elements that are repeated in the decoration of the entrance groups. The patterns of decorative grids, developed by the designers of the Artemy Lebedev Studio, reflect the achievements of the USSR in the period of the 1940-1950s in such areas as mechanical engineering, energy, mining, space industry, agriculture and construction. 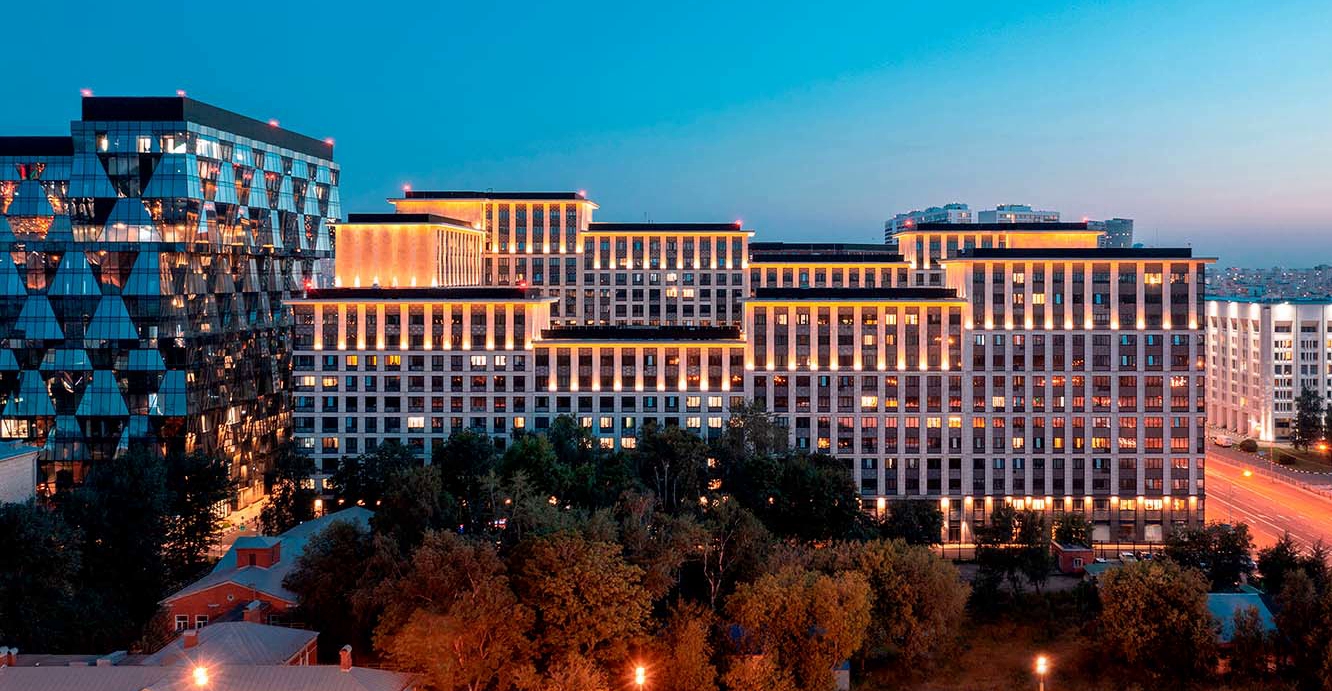 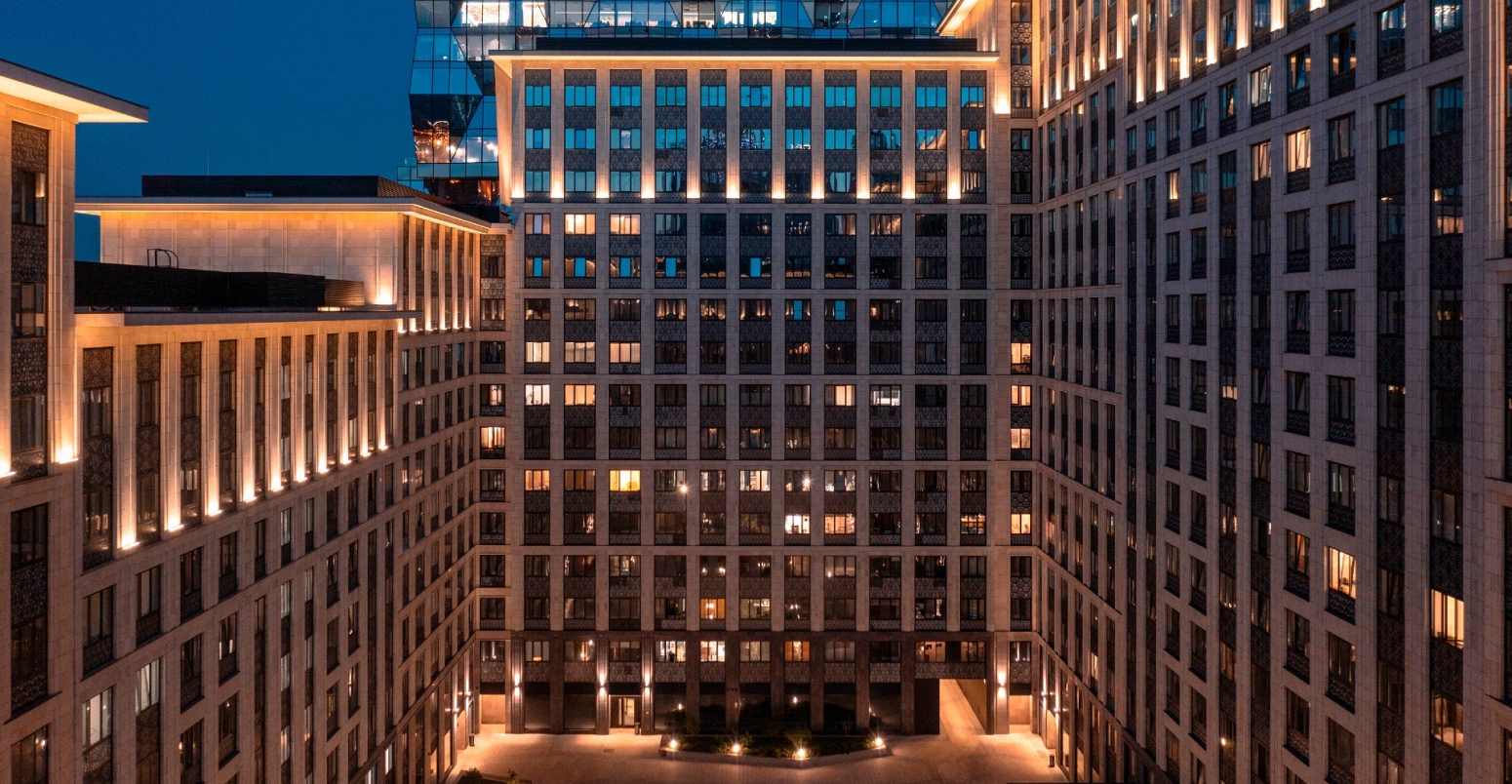 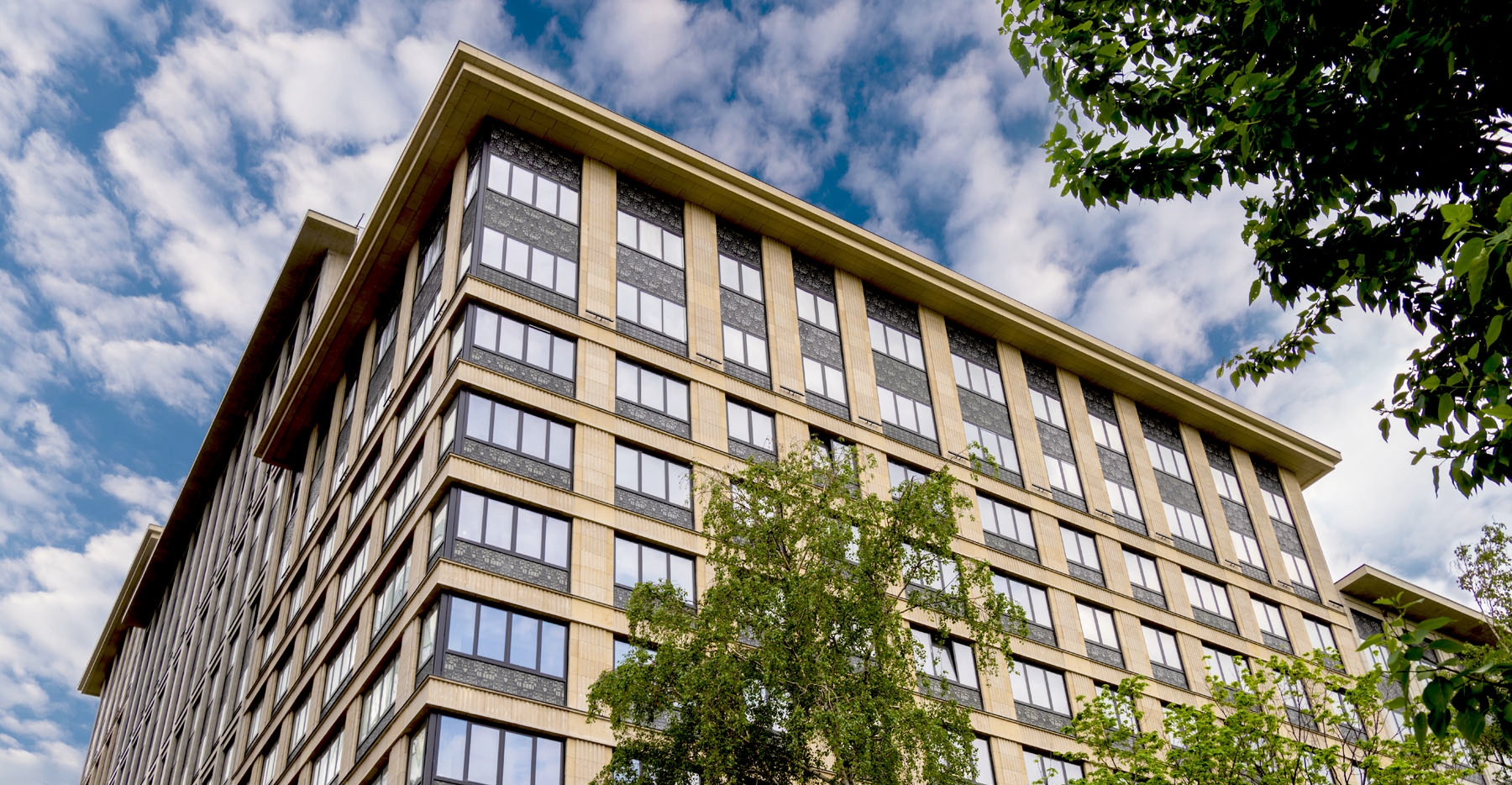 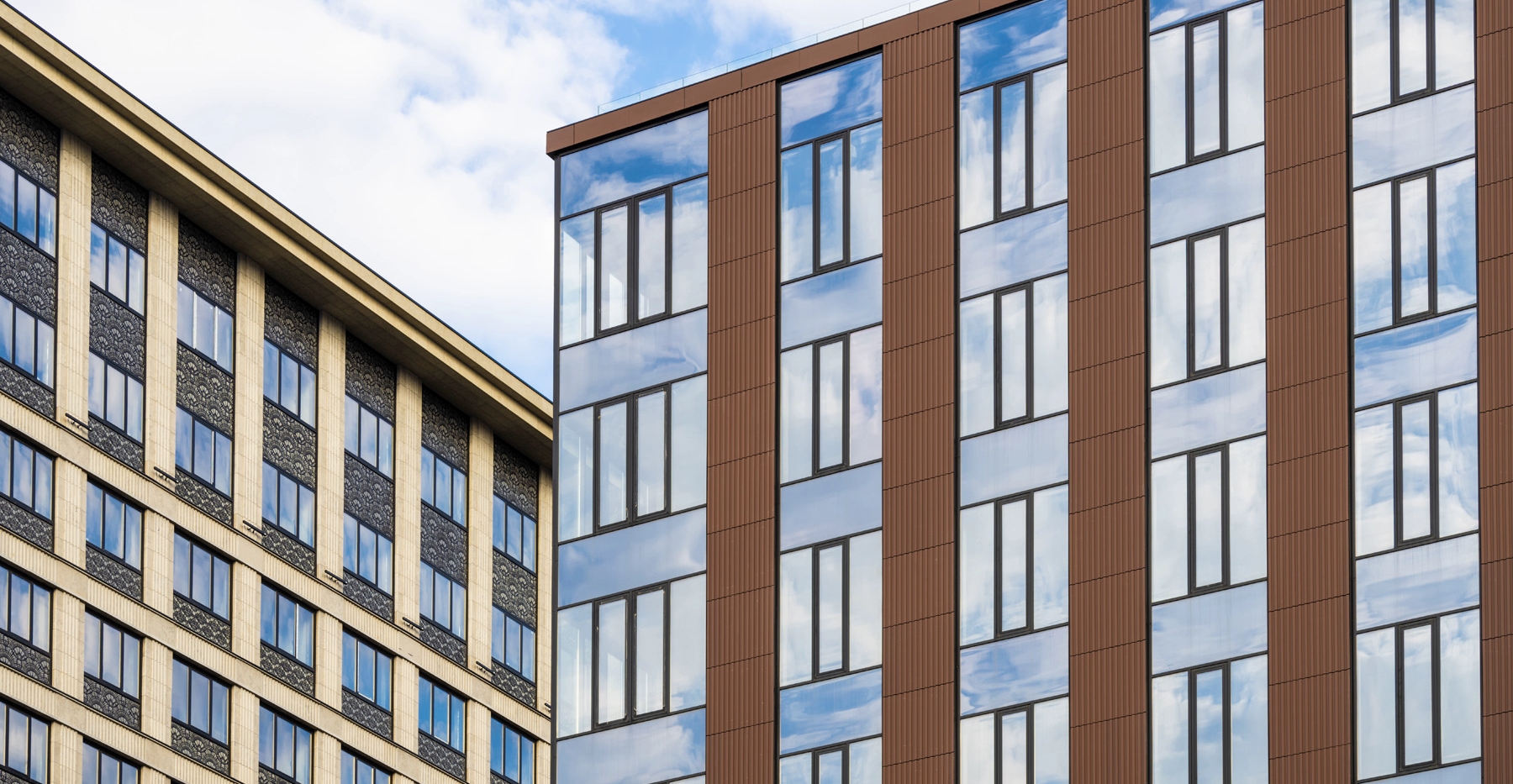 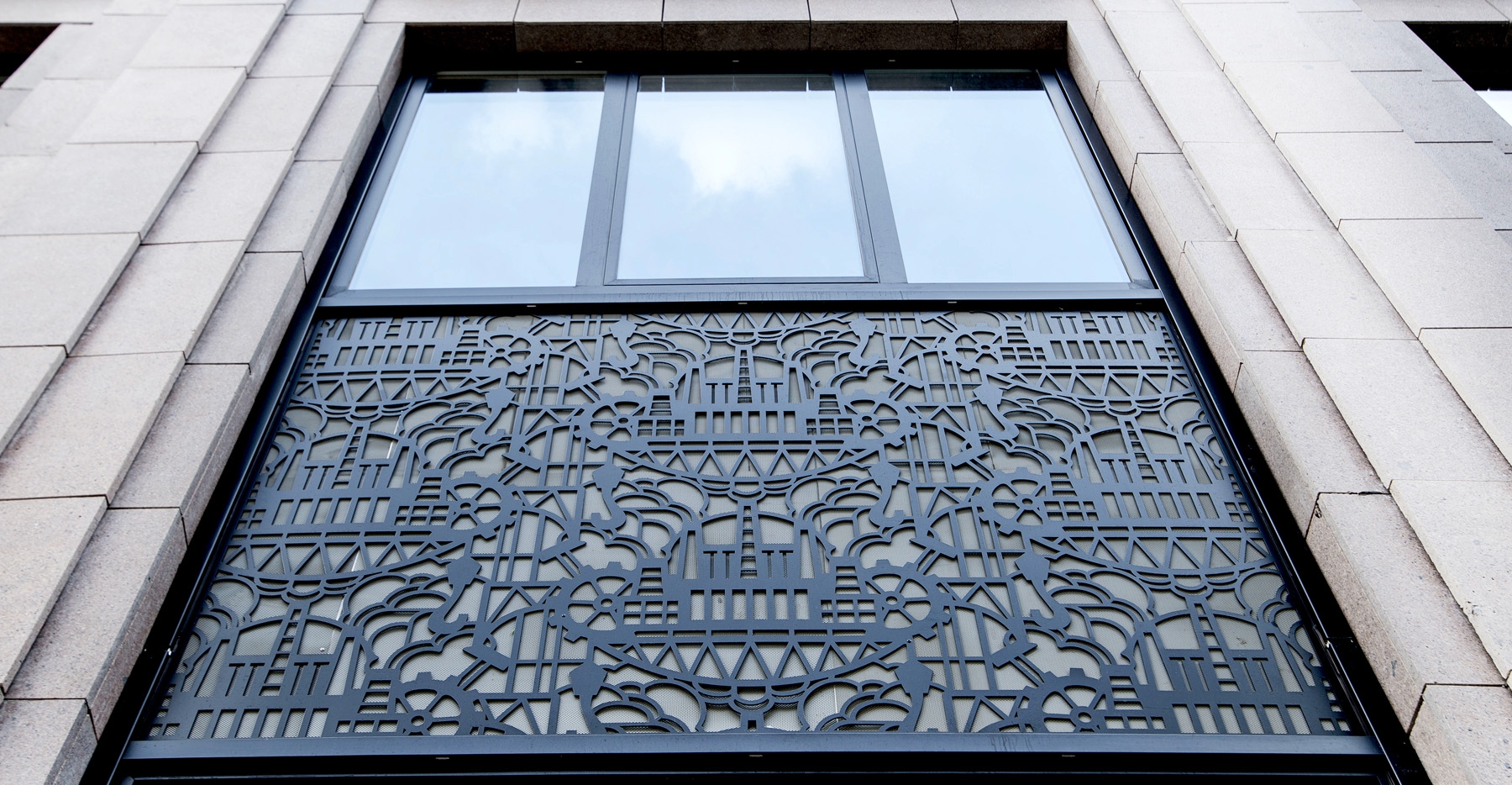 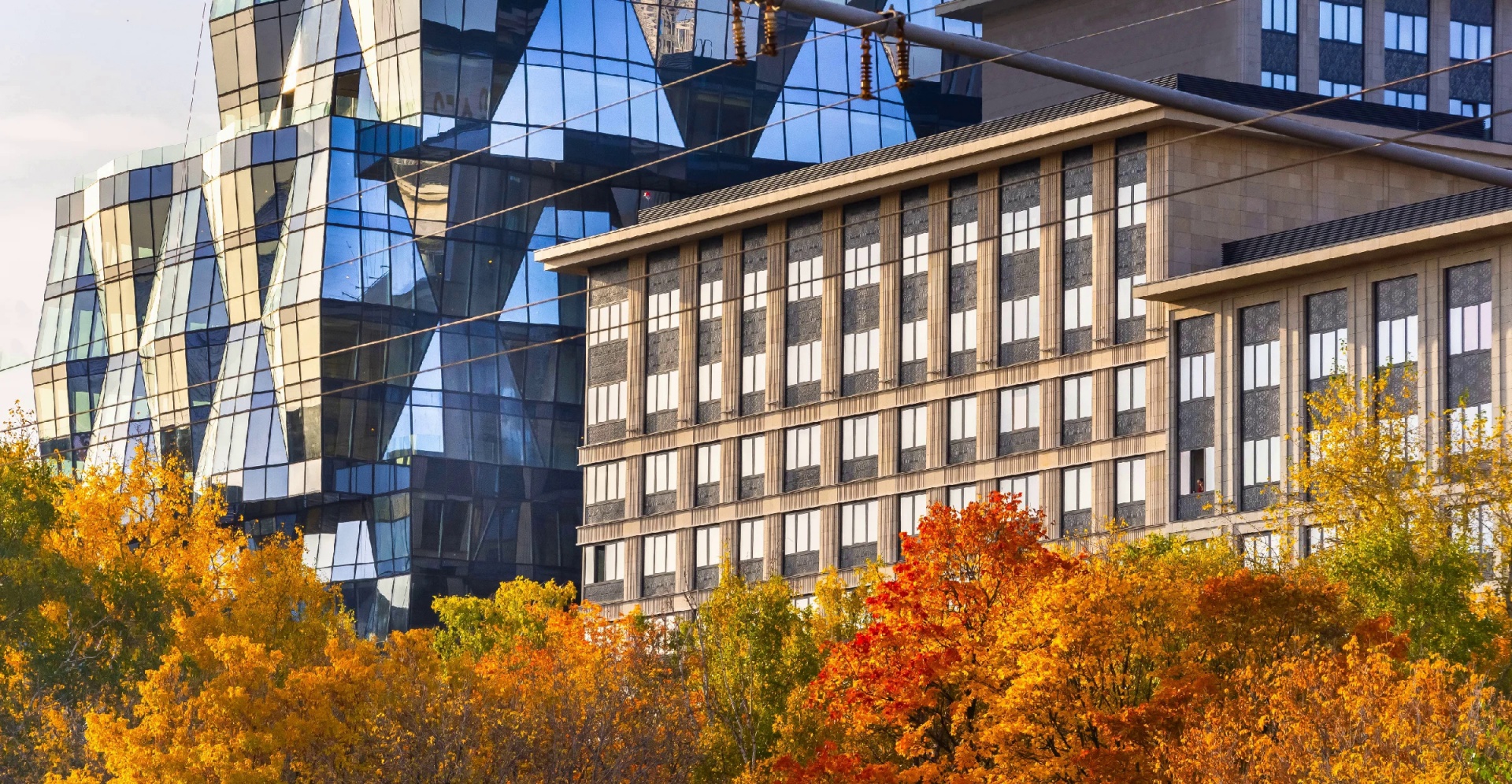 Landscaping with the installation of small architectural forms was carried out on the inner territory. The courtyard includes children's and sports grounds for three different age groups with a safe rubber surface, separated from each other by a hedge. There is a patio area that can accommodate table tennis and garden furniture. In the eastern part of the territory, a green recreation area has been organized for employees of the business center.


The infrastructure of the Iskra-Park complex includes a restaurant, a cafe, a bank branch, a beauty salon, a fitness center, a children's development center, as well as various shops located on the first non-residential floors.


Video surveillance and access control systems ensure the security of the complex. Under the buildings there is a three-level underground parking lot designed for 1,400 cars. And in the guest parking area between the office center and the residential building, a charging station for electric vehicles with a capacity of 50 kW has been installed. There are also electric chargers in the parking lot. 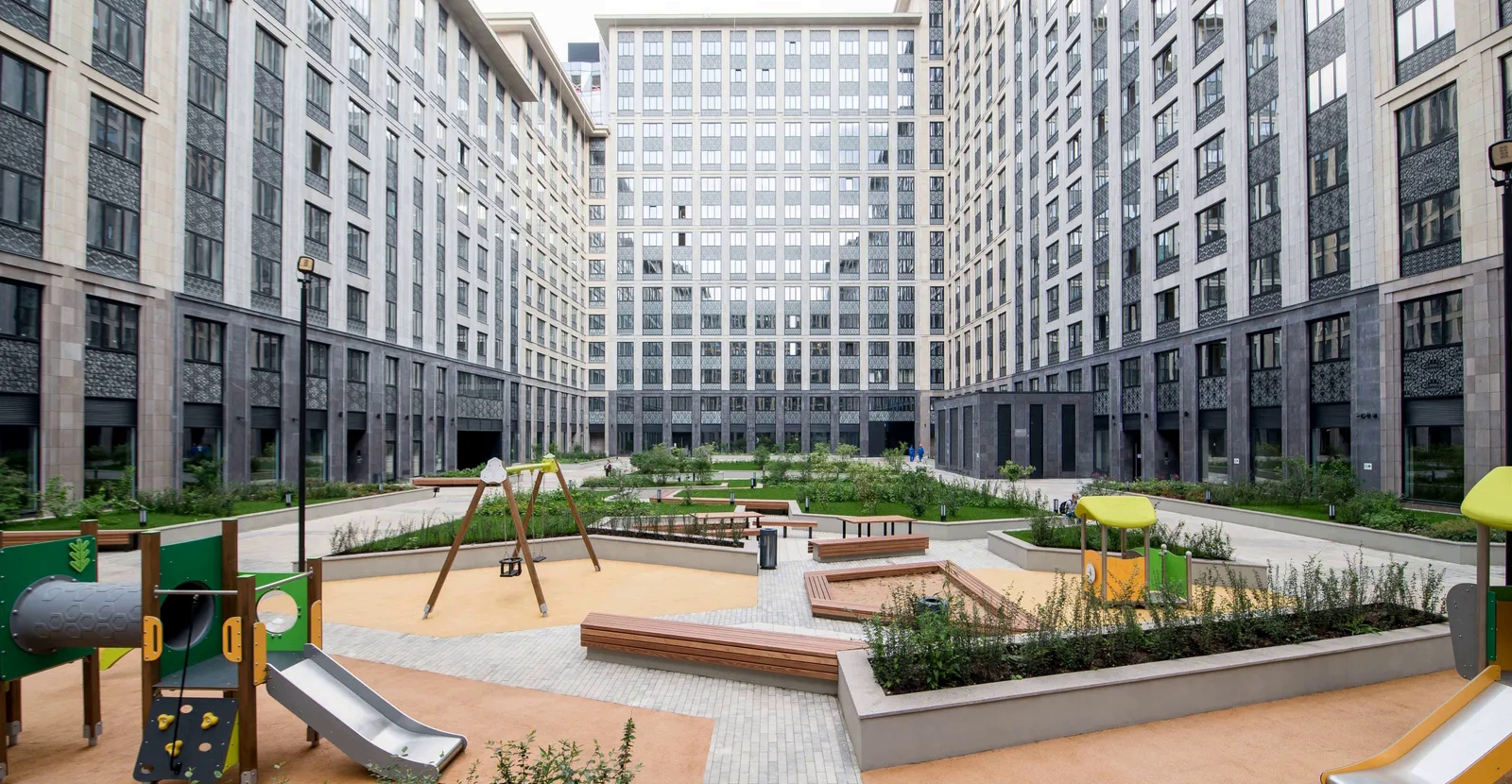 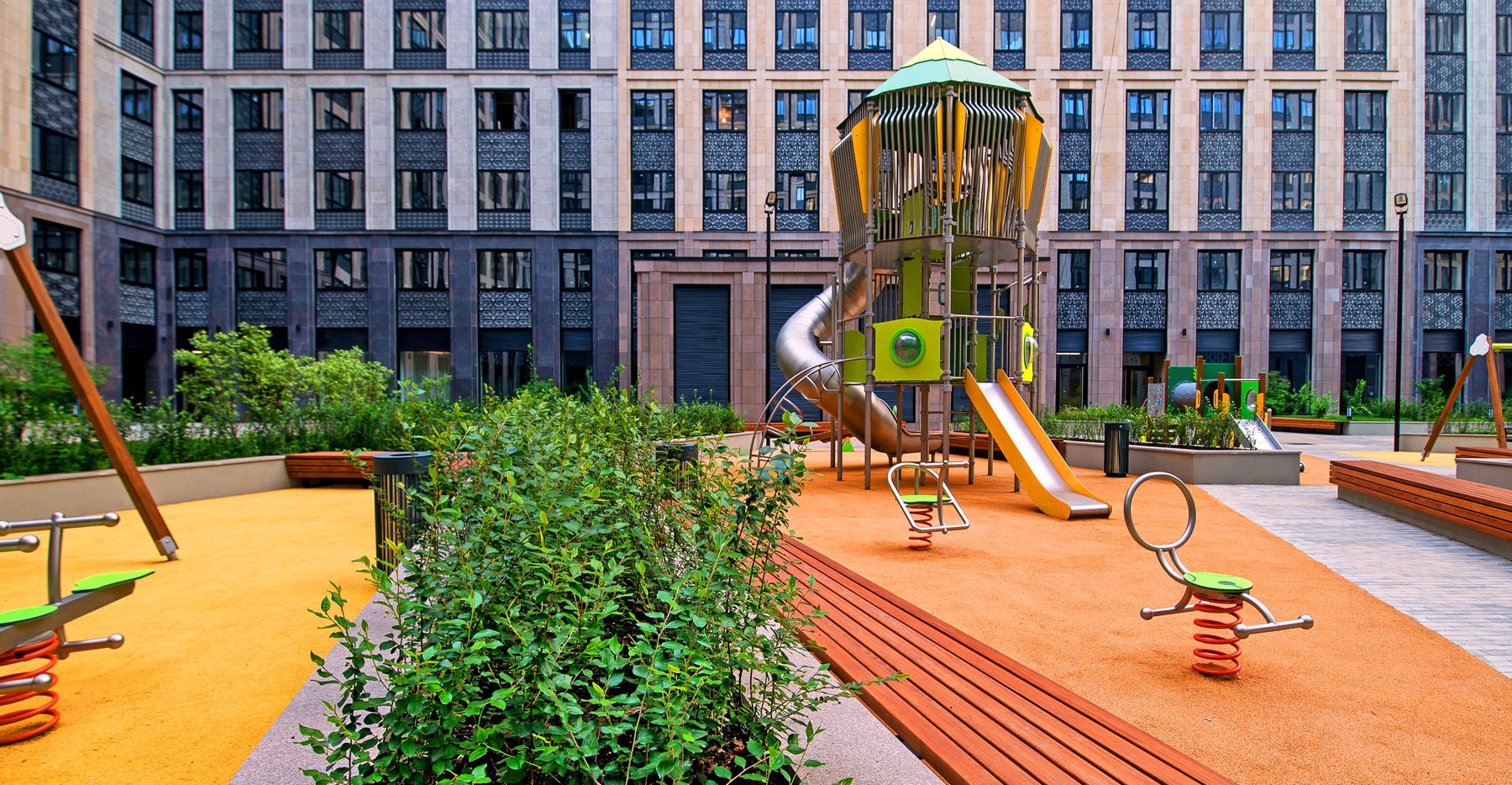 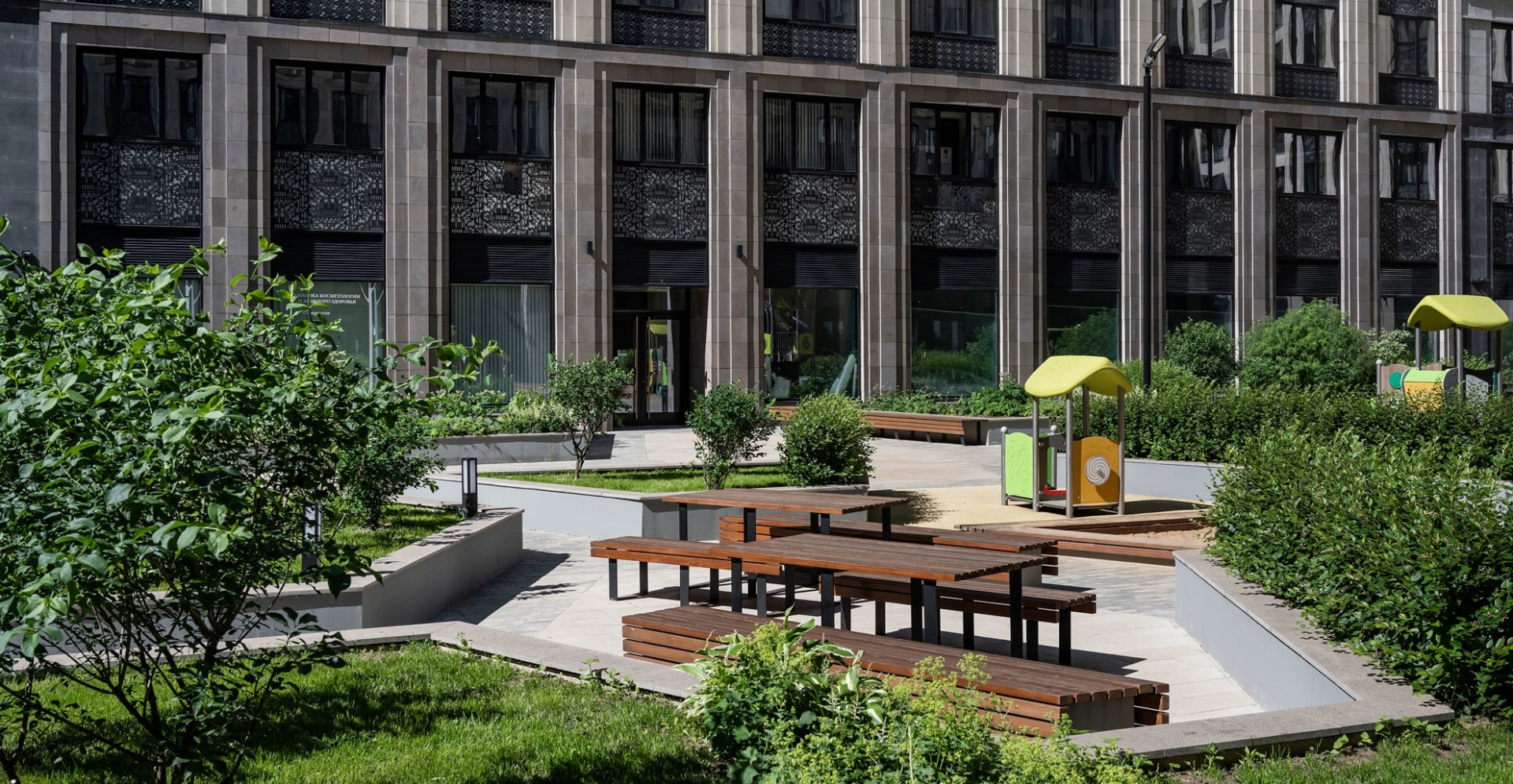 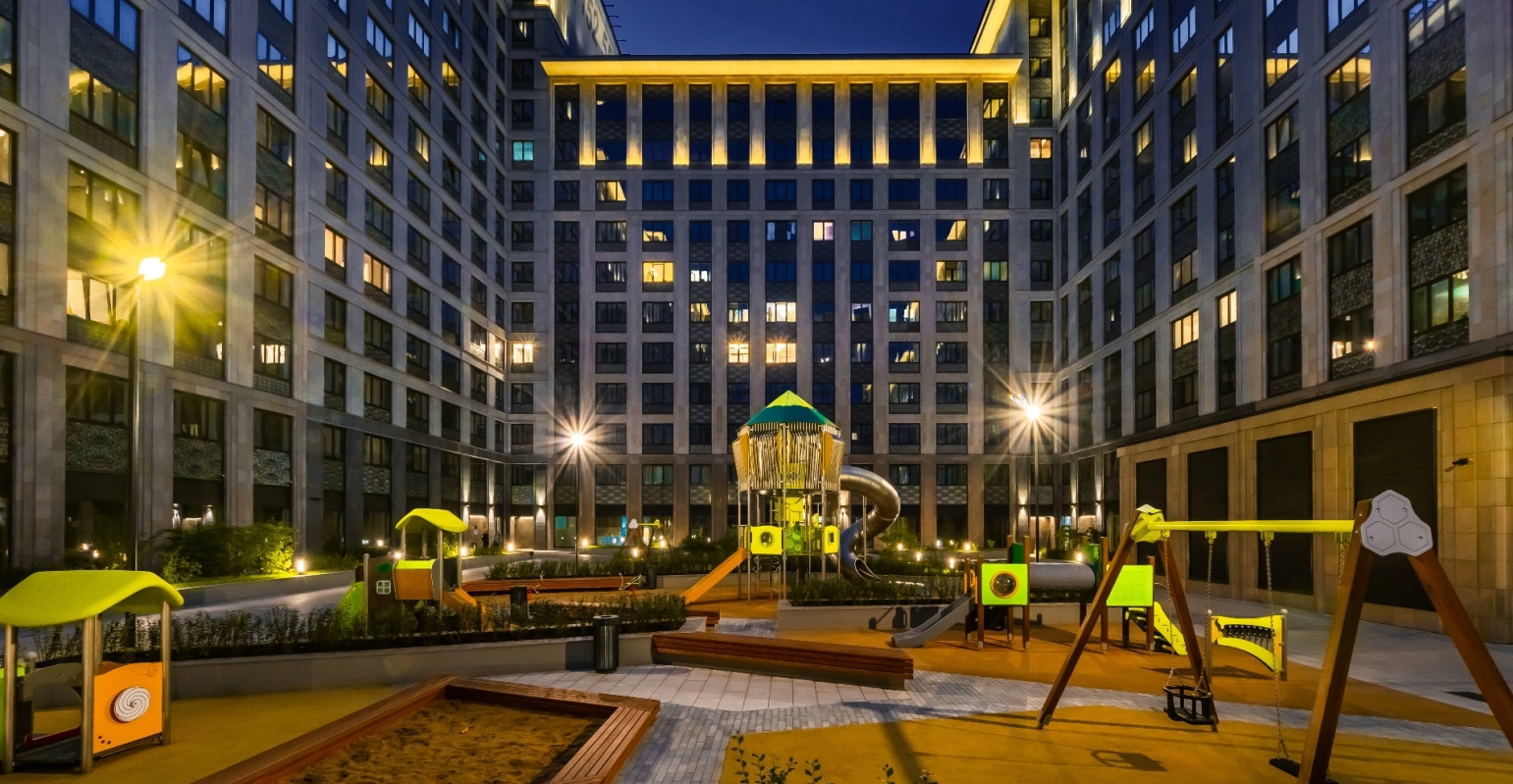 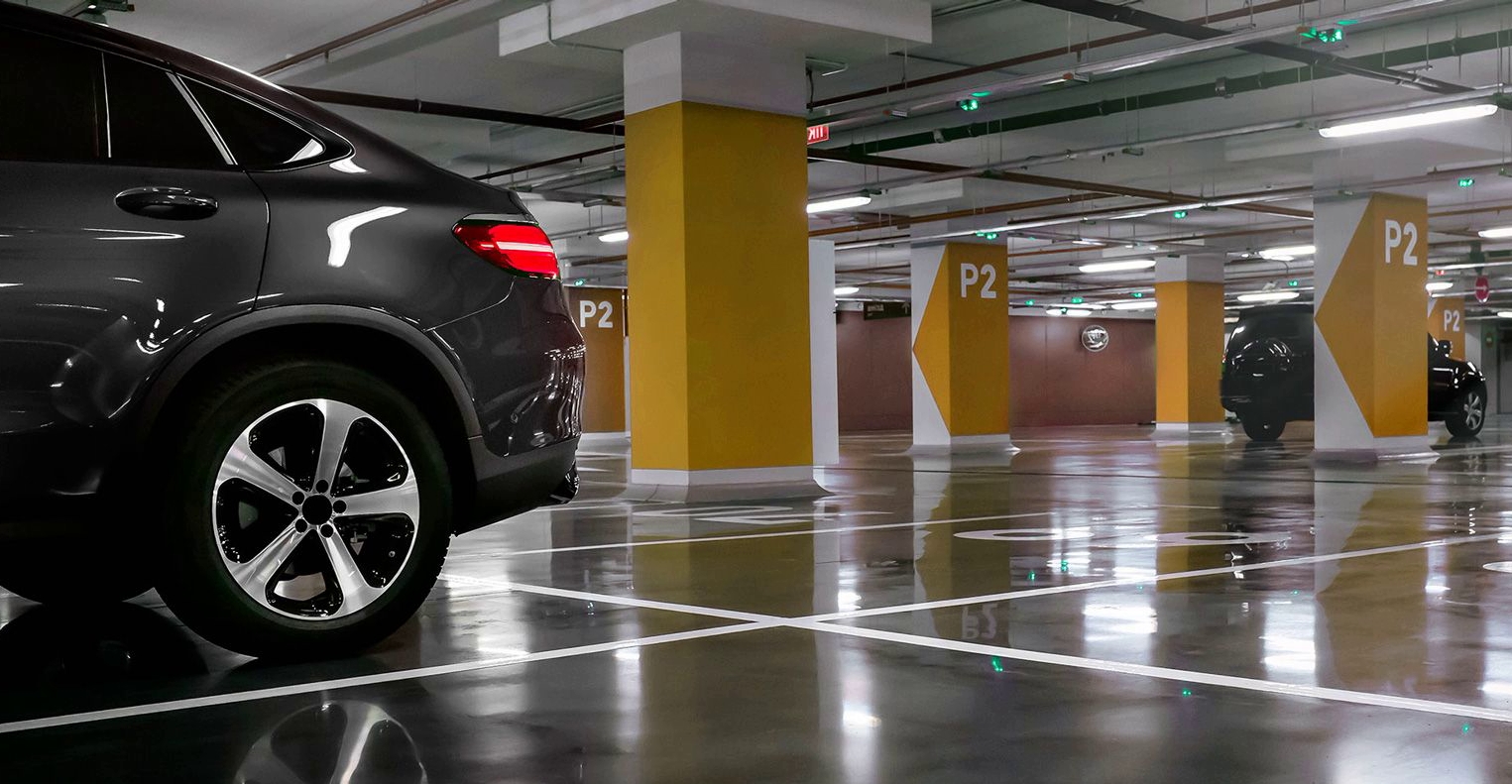 For common interior spaces, a modern custom design has been developed, made in the general style of the project: light-filled halls with high ceilings and huge stained-glass windows, elegant finishing with natural stone and fine wood. Each entrance has a 24-hour concierge service.


The buildings of the complex are equipped with modern automatic fire alarm systems, as well as warning and evacuation control systems. Modern air conditioning systems and supply and exhaust ventilation systems are responsible for the microclimate in the premises. Fast and comfortable communication between floors is provided by 15 Schindler elevators.


The apartments of the complex support smart home technology: all engineering systems can be controlled from the application on the smartphone. Residents can customize their own preferences to control curtains movement, lights, sockets, air conditioning, heating. 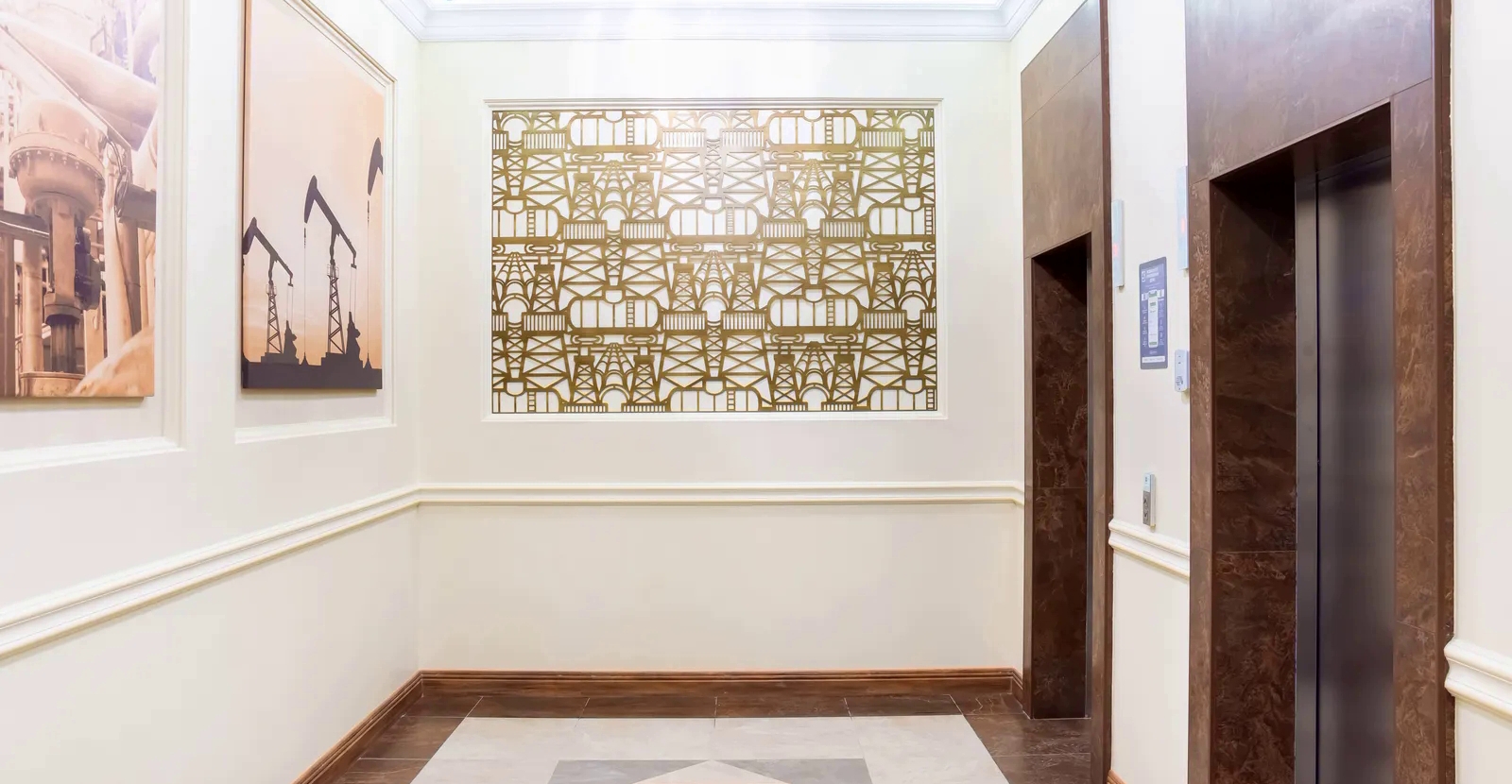 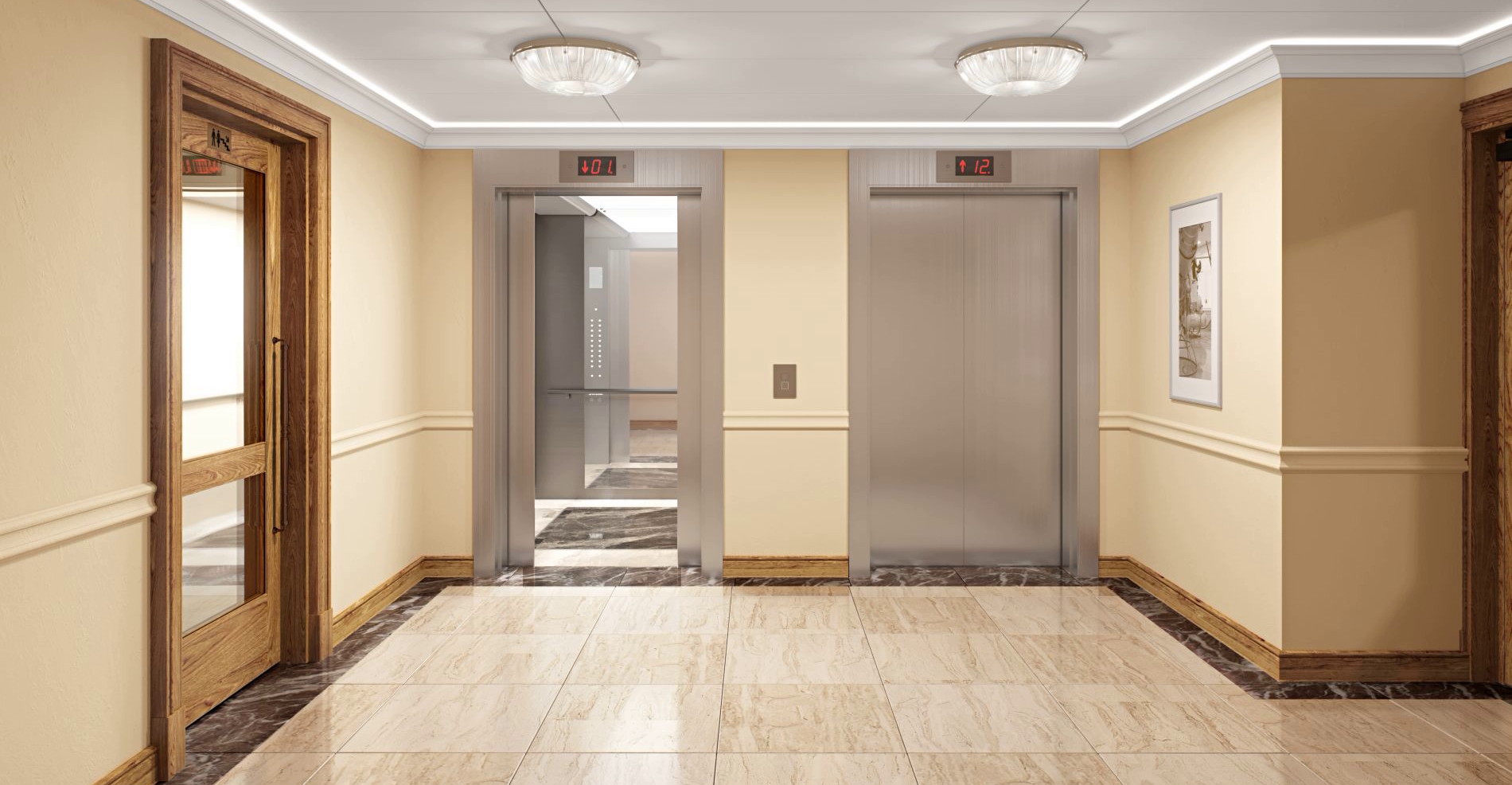 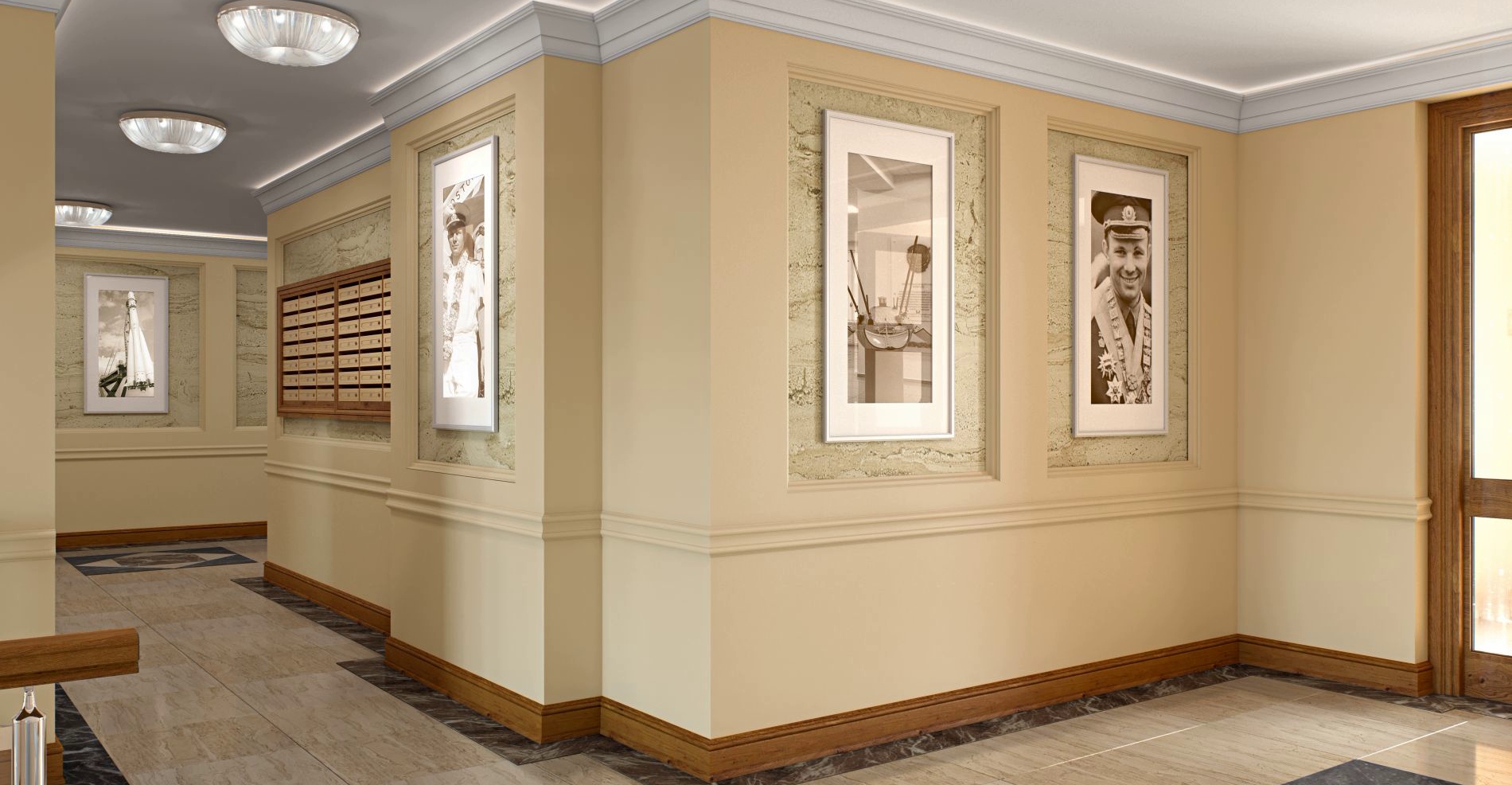 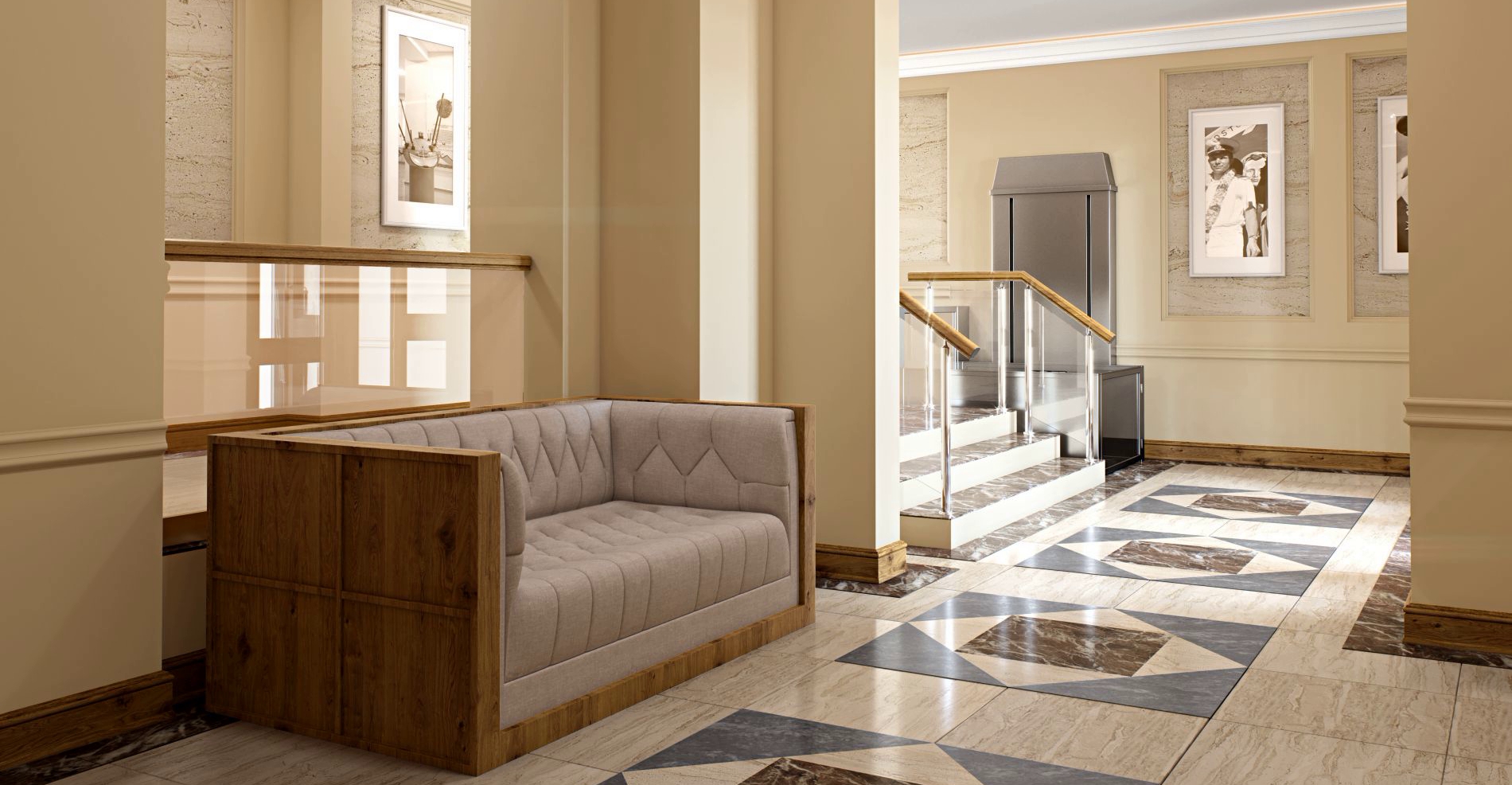 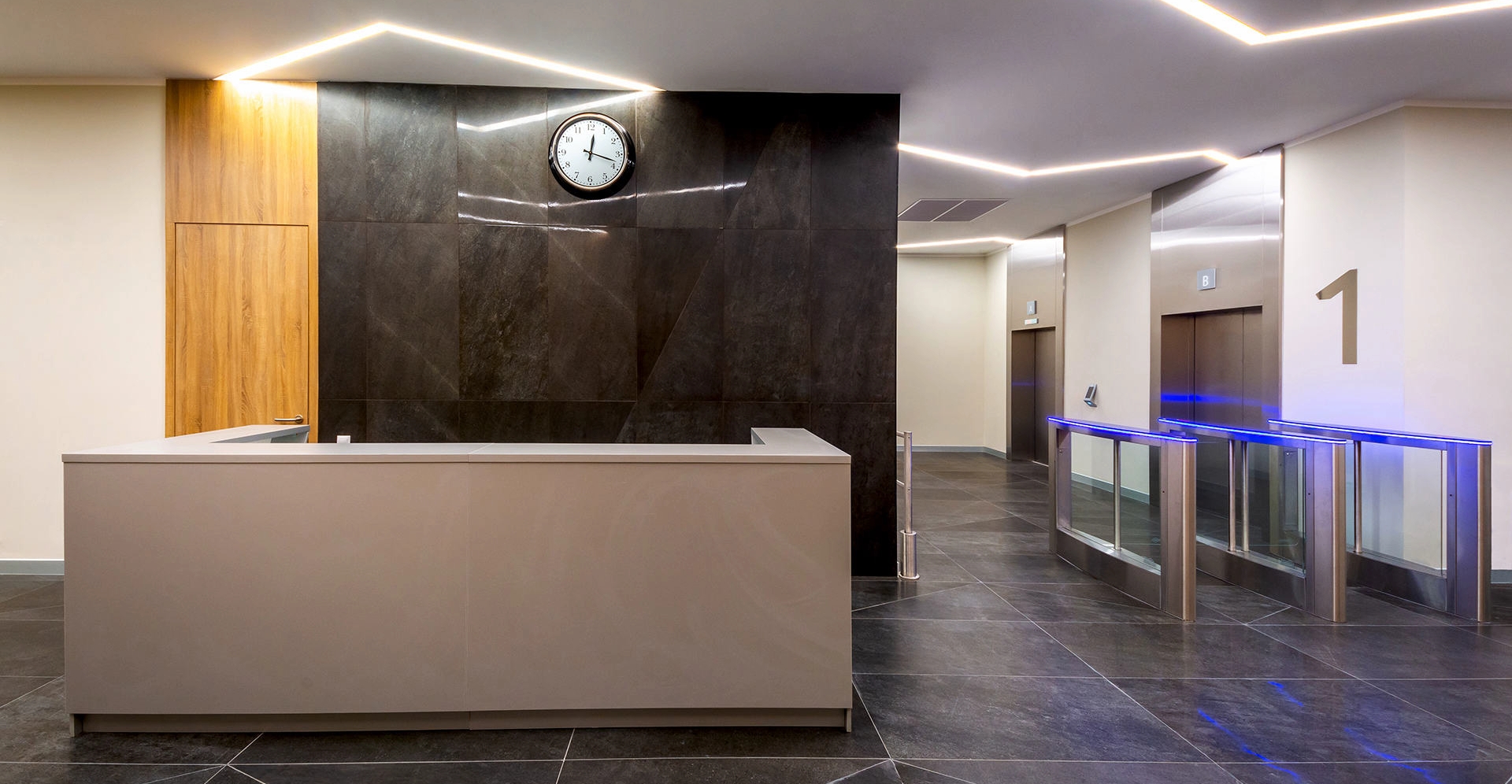 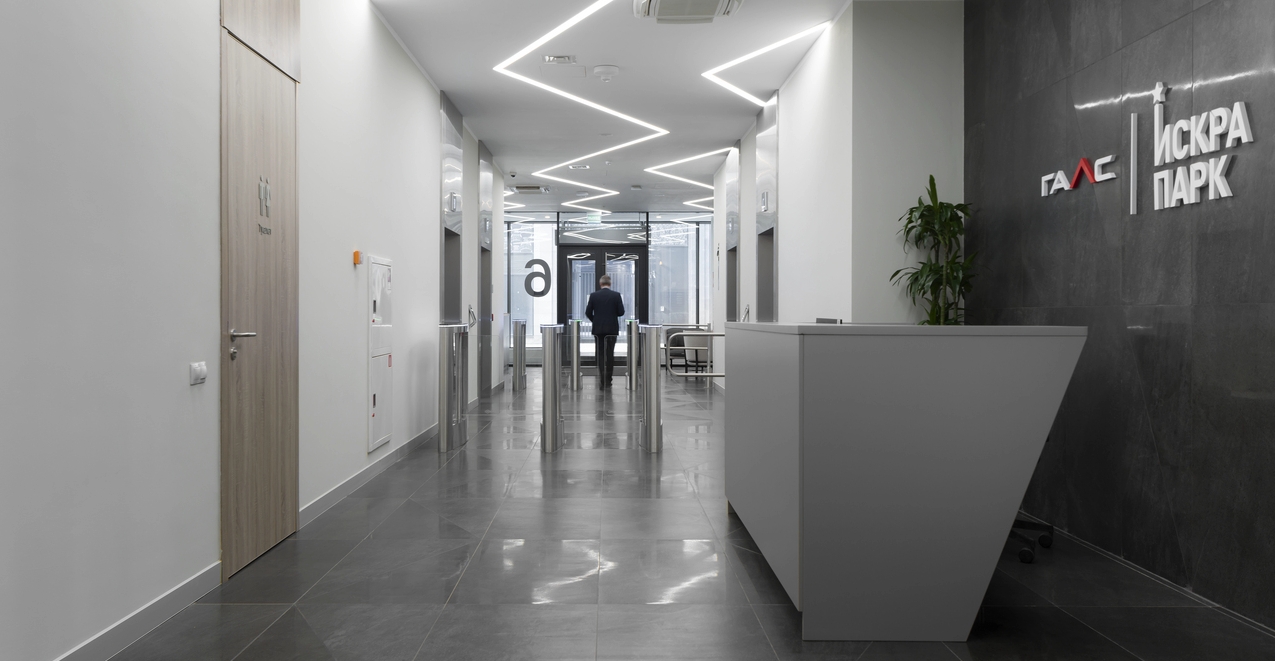 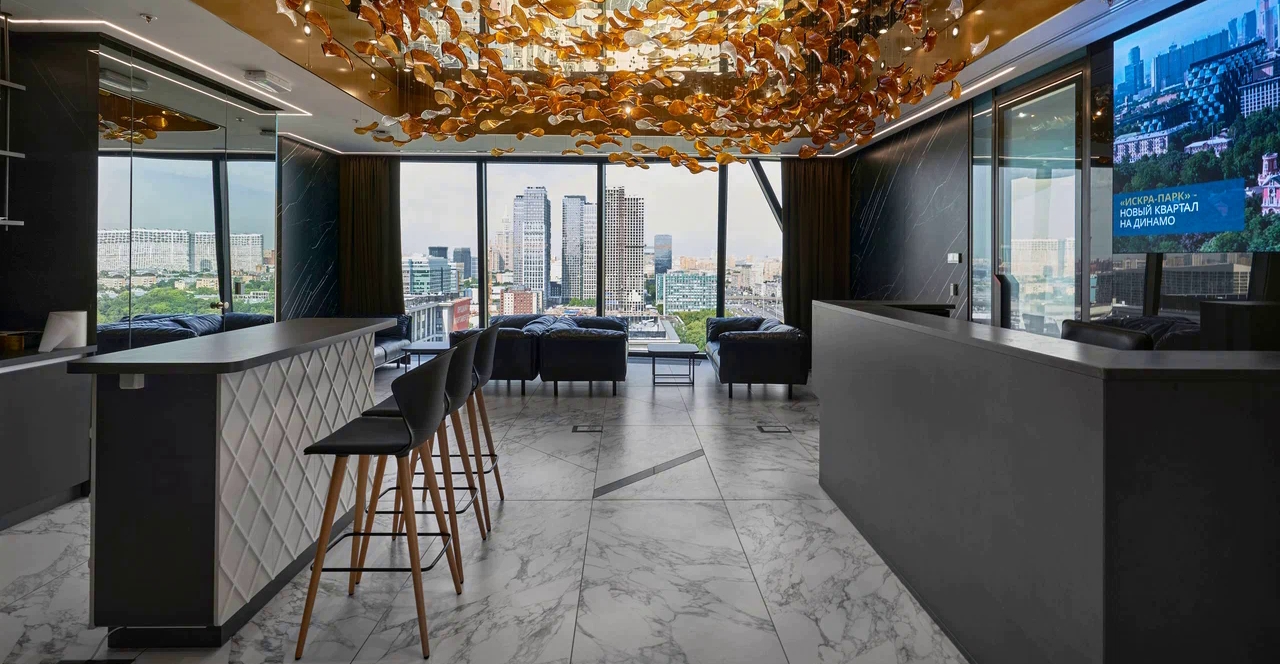 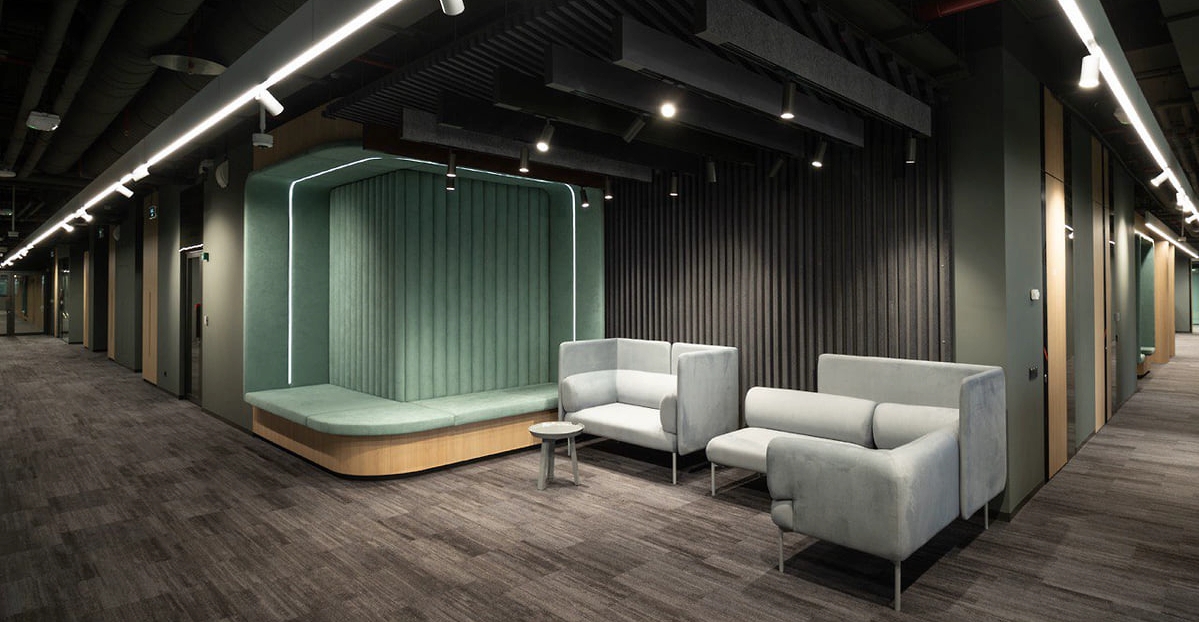 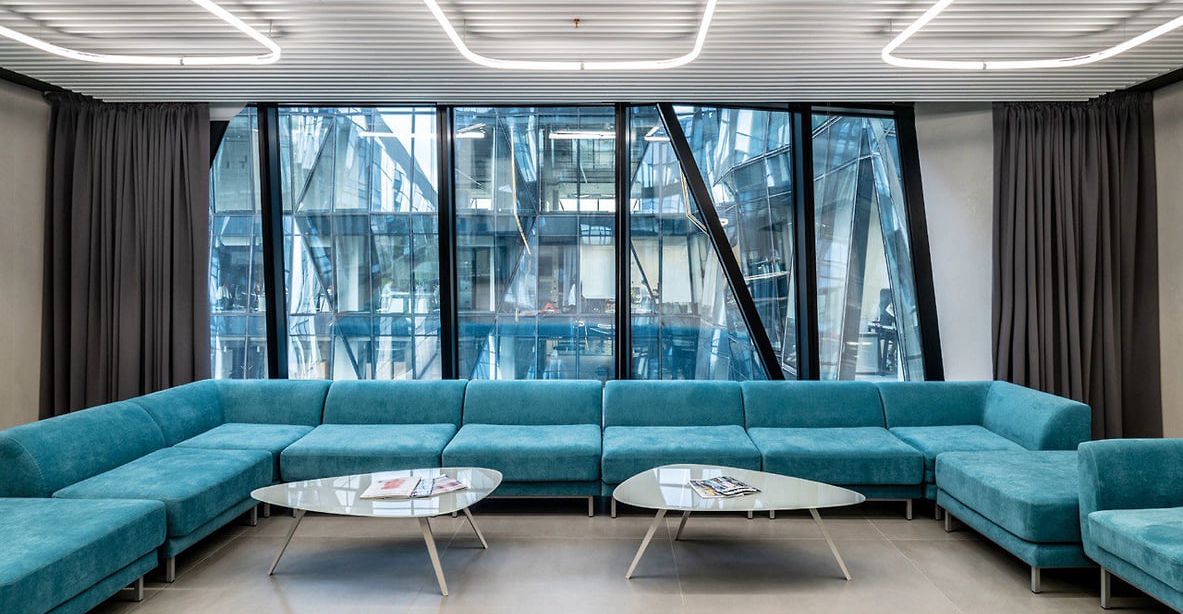 The Metropolis team participated in the project and designed structural solutions and internal engineering systems of the complex at the stages of Concept, Project Documentation and Detail Design. In addition, our specialists developed measures to ensure energy efficiency and a construction organization project.


A distinctive feature of the project is the location of the subway tunnels between the stations "CSKA" and "Petrovsky Park" of the Bolshaya Koltsevaya Line under the sole of all three buildings at a depth of 3 to 17 m from the bottom of the foundation to the apex of arch of the tunnels. 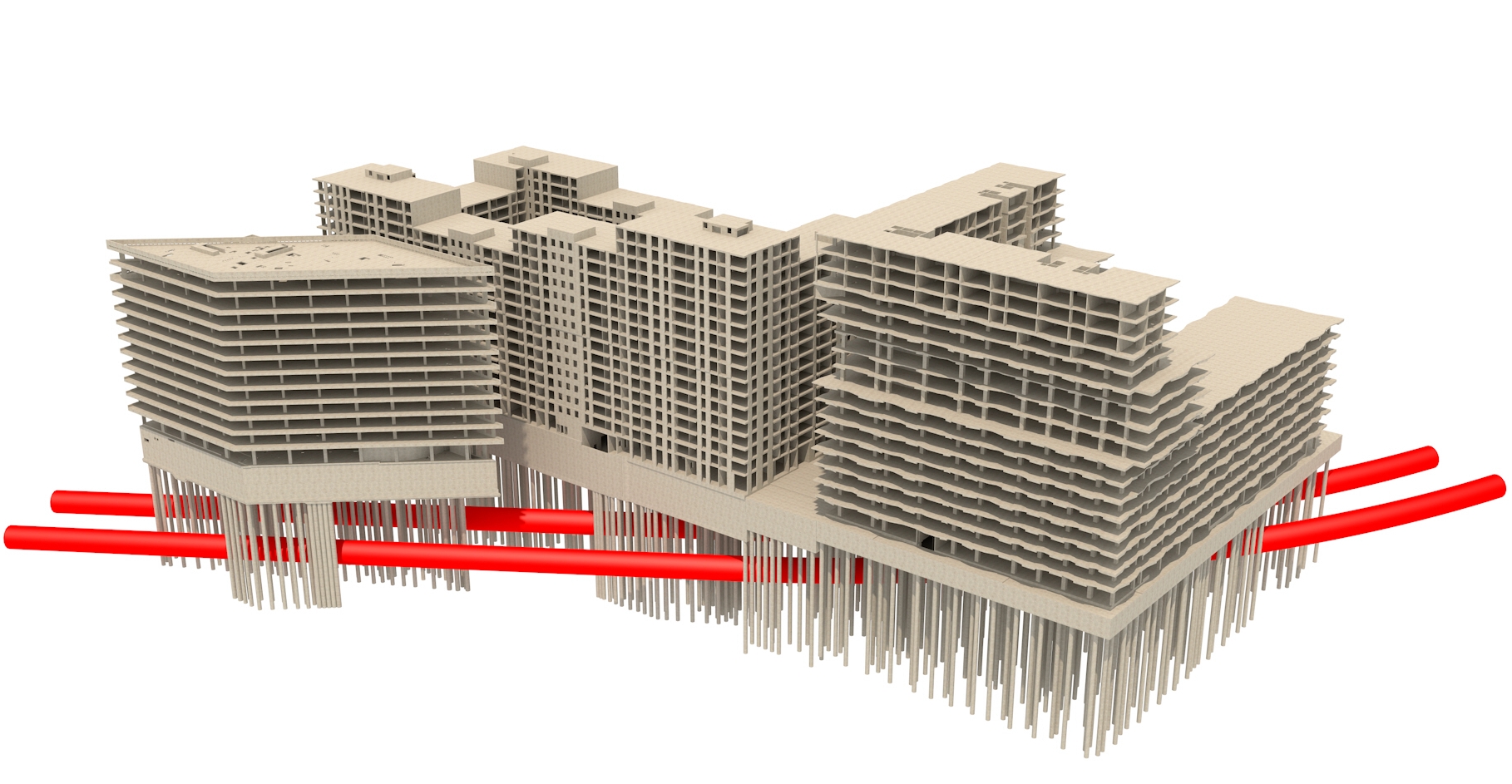 Mutual arrangement of the buildings of the complex and subway tunnels 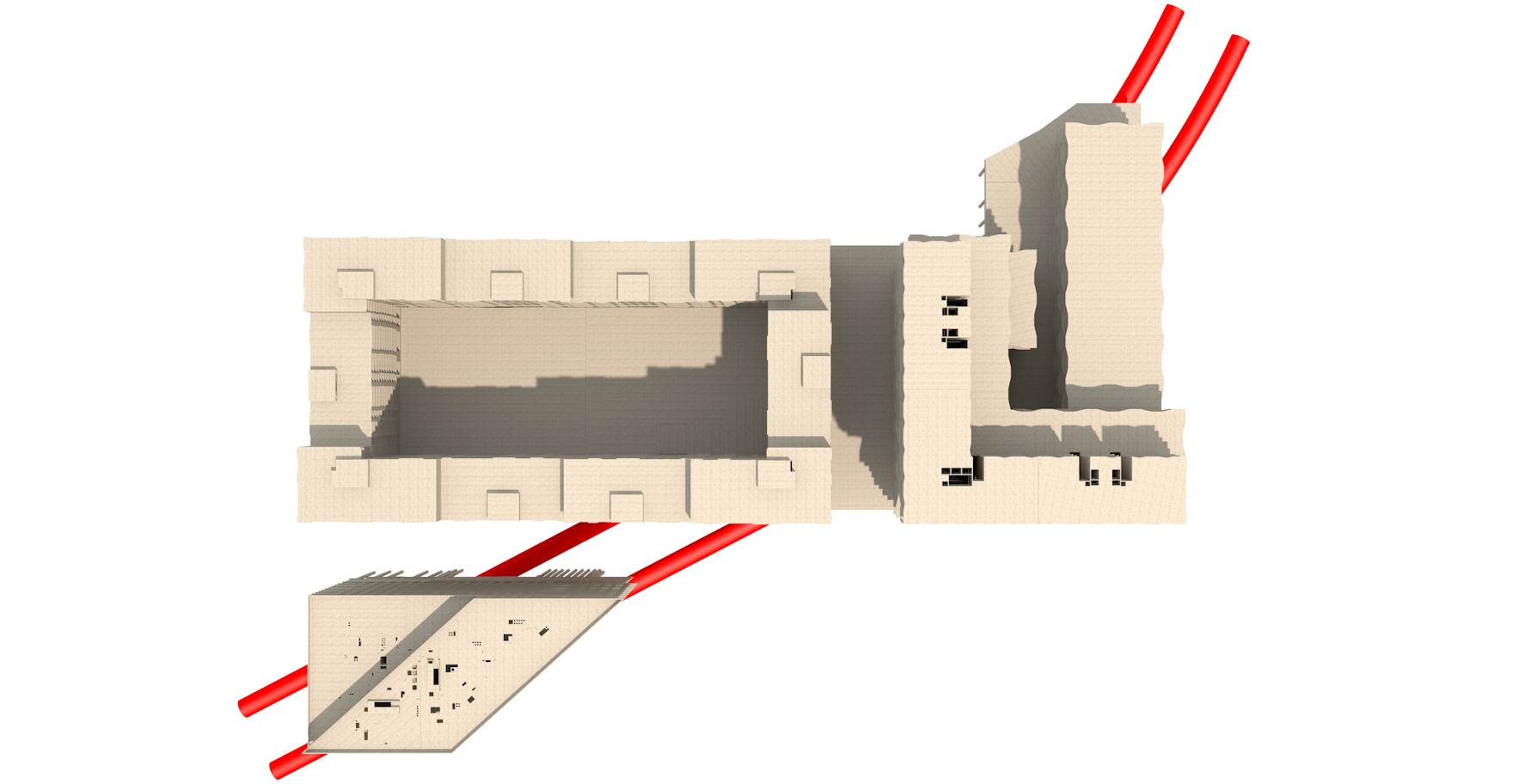 Mutual arrangement of the buildings of the complex and subway tunnels


The bearing capacity of the tunnel lining did not provide for the possibility of absorbing additional loads from the building, therefore, the construction of foundations over the tunnels with the transfer of load to the ground from the entire building was not allowed.


As an additional restriction, the Moscow Metro specified the dimensions of the technical zone of the metro facility, within which piles were not allowed. The dimensions of the zone were 3 m to the side and 5 m up from the tunnel contour, and mandatory coordination of the movements of the soil mass surrounding the subway tunnels was also required.


The limitations from the Moscow Metro regarding the loads led to the need for the construction of bridge structures - transfer foundations based on piles located along the technical zone of the subway. The maximum span of transfer sections is 13.2 m.

Foundation structures - sectional drawings of the buildings of the complex

In the area of intersection of the outer walls of the underground part of buildings and subway tunnels, it was planned to install beam-walls that redistribute the load from overlying structures to piles located on both sides of the transfer bridge structures of the foundations. 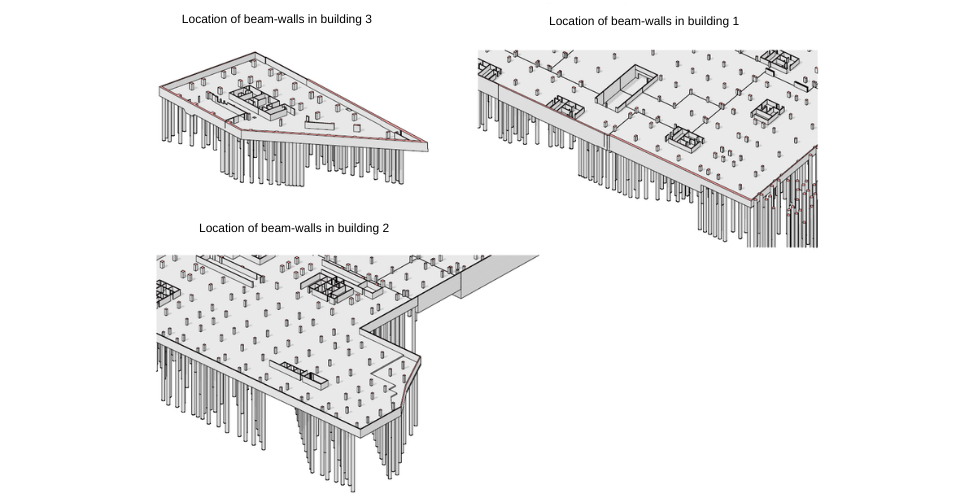 The structural system of the building adopted in the project is frame-wall with stiffening cores. The frame is formed by a system of vertical elements - pylons, walls and stiffening cores, which are staircases and elevator shafts, and horizontal disks are floor slabs.


Spatial rigidity is ensured by the joint work of the load-bearing structures of floors, reinforced concrete columns and pylons, vertical stiffening cores and vertical stiffening diaphragms, which are rigidly embedded in the foundation slab. All load-bearing structures of the complex are designed from monolithic reinforced concrete. In the area of conjunction of the designed object’s parts with different number of storeys, cutting with expansion joints is provided.


To minimize the movement of the soil mass surrounding the tunnels, pile foundations were adopted as foundations for building sections located directly above the tunnels. According to the characteristics of interaction with the soil, these piles are referred to as end bearing piles. Outside the area of the subway tunnels, the foundations are on a natural foundation.


The project provides for the fencing of the excavation, carried out using a slurry wall technology of a trench type, 800 mm thick with a strapping beam in the upper part with a section of 600x600 mm.


The slurry wall forms a closed circuit, since in the original version of the project the underground part was specified as unified for all buildings. The stability of the slurry wall during excavation is ensured by a 1,2,3-tier strutting system (depending on the number of underground floors / depth of the excavation).


Due to the restrictions of the Moscow Metro on the location of structures above the tunnels, there were places along the slurry wall route with a shallower depth. In these areas, the embedment depth was not enough to ensure the stability of the fence. To ensure operability, the design provided for the construction of a soil-cement base using Jet technology in a 10 m wide strip along the slurry wall. The thickness of the Jet array is 2.0 m. The calculations have confirmed the provision of strength and stability with a base of this type. 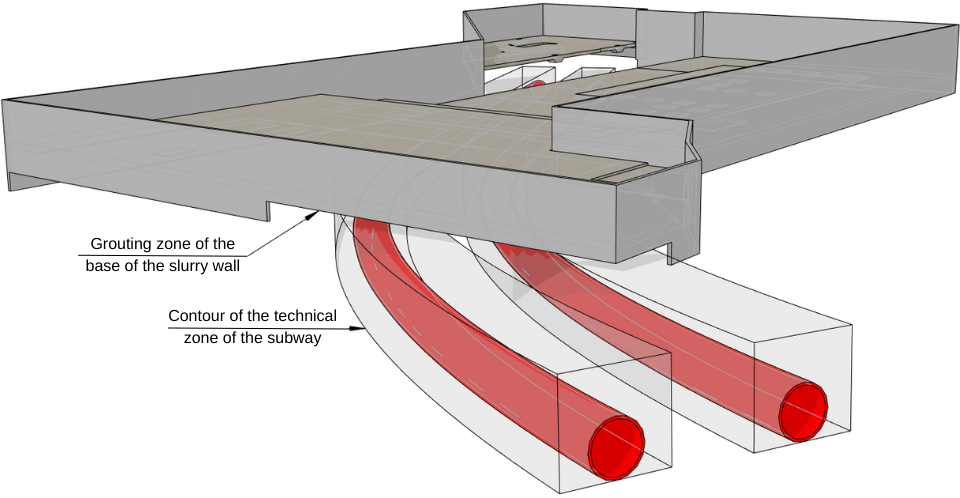 Grouting of the base of the slurry wall

According to the results of geotechnical calculations, the subway tunnel settlements did not exceed 9.9 mm with an average of 3-5 mm, which exceeded the additional allowable deformations originally issued by the Moscow Metro, equal to 4 mm. However, after reviewing the information provided in more detail, the estimated settlements were agreed upon.


During construction, the tunnel settlements were monitored to confirm that they were not exceeded.


Figures and facts
Scope of work
Other projects